Largs is situated by the Clyde estuary on the A78, some 26km north of Irvine and 22km south of Greenock. The town itself provides an opportunity for family birding, having a range of facilities and attractions to cater for non-birders. For those not wishing to use a car there is an hourly train service from Glasgow Central station and those travelling from southern and eastern Ayrshire can join the Largs train at Kilwinning. Regular bus services operate in both directions along the A78. There are 2 options for car-parking: payparking on the waterfront or parking for free on the streets off the waterfront. Both options can be difficult during the summer and the latter is not likely to endear visitors to the residents.

The mouth of Noddsdale Water (NS 198 604) is reached at the northern end of Largs. From the centre of Largs it is a 1km walk north along the sea-front, or if driving, continue north along the A78 tojust beyond the Queens’ Hotel and turn left into Aubrey Crescent. At the end of the crescent, with luck, you should be able to find a parking space and can proceed on foot. There is a paved footpath leading into a small public park which has a sandpit and climbing frame for children and pond which is used by model boat enthusiasts. Conveniently,there are also toilets and a gazebo to provide shelter. 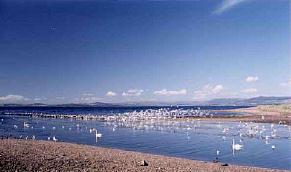 The beach is comprisedof shingle whichis steeply banked due to the action of the tides. The burn enters the sea over this area of raised shingle, which around the mouth of the burn, forms a broad, level area where seaweed can find a foothold. Across on the north side of the burn the shingle beach continues but above the shingle the habitat is very different from the managed south side. Naturally growing flowering plants and grasses provide cover and food which could make that area worth a good look, especially outwith the summer season. Manicured lawns in the park, which also has mature deciduous trees, provides a contrast and another set of habitats. The short grass could prove attractive to a number of ground-feeding passerines, while the mature trees give opportunities for leaf feeders. Noddsdale Water forms the northern edge to the park and the well-grown gardens on the other side over-hang the burn with well established native deciduous trees and a variety of shrubs. Where the burn crosses the shingle it provides a good bathing area for preening birds.

Offshore all species of diver are possible during spring and autumn, Gannet in the summer and Cormorant and Shag at any time of the year. Winter is the best time for the variety of wildfowl that it is possible to encounter in the Clyde estuary. Although geese are unusual here ducks such as Eider, Goldeneye, Red-breasted Merganser can be found offshore with Wigeon, Teal and Mallard all likely.

The areas of seaweed provide feeding for Curlew and Oystercatcher throughout the year while the Redshank is common along this coast and Turnstone orPurple Sandpiper might turn up. Starling and crows are always avid searchers of seaweed. All of the commoner gulls can be viewed here, bathing in the fresh water provided by the burn and making the most of the food provided by visitors. Within the park you might expect to see commoner passerines such as Pied Wagtail, Blackbird, Song Thrush, Robin, Dunnock with Great and Blue Tit in the trees while the burn itself and the vegetation on the other side could give Grey Wagtail and warblers. The vegetation on the wilder north shore could be worth a look for seed-eaters during the autumn and winter months with species such as Goldfinch, Greenfinch and Linnet being likely.