Noddsdale (or Brisbane Glen, as it is marked on the OS Explorer series map) runs from Largs on the Clyde Coast (on the A78 26km north from Irvine and 22.5km south from Greenock), north-north east into Clyde Muirshiel Regional Park. Starting at the mouth of the Noddsdale Water (NS 198 605) the head of the glen is reached some 11km inland (NS 251 678) having risen to about 270m. Access to the glen is via the minor road, on the right as you travel north, which is clearly signposted – Brisbane Glen Road – towards the north end of Largs from the A78. Private transport is essential unless you are prepared to walk or cycle. 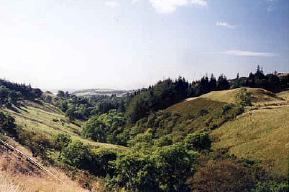 Once out of town there are no marked paths until Outerwards Reservoir is reached. Next to the reservoir is a car park, picnic area and woodland and moorland trails associated with Outerwards Community Woodland. Otherwise, the glen is enclosed and the normal countryside code and access conditions must be observed. Just over the watershed north into Inverclyde lies the Cornalees Centre of Clyde Muirshiel Regional Park, a ranger base with woodland and moorland walks, toilets, shop and refreshments.

Brisbane Glen is named after Thomas Brisbane who also gave his name to the city and river of Brisbane, Australia. Thomas was a keen astronomer building his own observatory near Largs and establishing another near Sydney while he was Governor General of New South Wales. Also named after him are a planetarium in Brisbane and a crater on the moon.

Byway suitable for bikes with access from either Largs or Greenock.

The first kilometres of the road pass through the outskirts of Largs. Beyond the boundary of Largs great care should be exercised if parking a car as the road is narrow and twisty. On leaving the built-up area the countryside at these lower reaches of the glen consists of improved grasssland to enable usage as pasture and the road passes along past hedgerows with mature deciduous trees frequent. At this stage there is no sign of the Noddsdale Water as it is between 100m and 200m to the left of the road, hidden by the trees which line its banks. The trees along this stretch comprise mature native deciduous species and conifers. Half a kilometre further on the wood widens out to stretch up the north slope of the glen and about 1km towards the head of the glen. By this time the glen has narrowed and the road passes out on to a more open aspect and the surrounding moorland opens up to reveal a new habitat. A short distance further on the Outerwards Reservoir appears with a good stand of mixed, mature woodland surrounding the north-east corner. Once beyond the reservoir Noddsdale Water becomes a relative trickle and the outlook is purely moorland with the exception of a stand of mature conifers adjoined by a plantation of conifers up to about 4 metres in height. The south-eastern slopes of the glen are split by several small, rocky burns which provide the opportunities for species such as Rowan (Sorbus) to establish a foothold and break up the predominantly brown shades with streaks of green.

Given the variety of habitat throughout the length of the glen it should be possible to find many common species such as various finches, and tits along with Grey Wagtail, Robin, Wren, Blackbird and Dunnock. In summer these will be complemented by warblers in the lower and middle reaches and Whinchat – joining the resident Stonechat – and Wheatears higher up. Of course, some species fewer in number can also be much more obvious and sight of Buzzards wheeling over the glen or rushing through the woodland should be no surprise. Out on the moor Meadow Pipit and Skylark may be numerous in summer and their numbers may swell in autumn when northern migrants pass through. Also out on the moor Curlew and Short-eared Owl may be present and there is the possibility of seeing Raven, Red Grouse,Cuckoo – most likely heard calling from a hidden perch – or, if you are lucky, a Peregrine or Hen Harrier.

In the lower and middle reaches more elusive species such as Treecreeper, Goldcrest and Great Spotted Woodpecker might be found in the woodland and Noddsdale Water itself may produce Grey Wagtail or Dipper.

During the winter months the moorland will be largely empty of birds although the middle and lower reaches may be productive of flocks of finches and tits and there is habitat also for winter visitors such as Fieldfare and Redwing.

Surrounded by gardens, waterfalls and mixed woodland, below the castle is a walled garden which, like the New Zealand Garden and other parts of the park, grows exotic flowers and shrubs that thrive in the mild West Coast climate. The Country Centre is open to the public for most of the year and offers a wide range of recreational activities including horse riding, children’s play areas, and adventure wood, exhibitions, a tea room, a cafe and a gift shop.