The village of Ballantrae (NX 083 826) lies on the A77 approximately 21 km south of Girvan. This whole stretch of coastline, including Ballantrae Shingle Beach, is a Site of Special Scientific Interest. There are several laybys from which the sea and shoreline can be scanned. 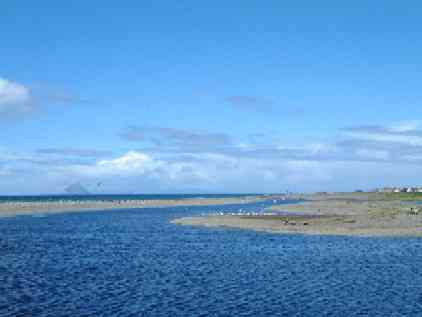 At the southern end of Ballantrae a westwards turn leads from the A77 to a large car park, with toilets, by the shore. The shoreline, from the harbour at the north end to the shingle bank and estuary of the River Stinchar at the south end, is well worth exploring. A good view over the estuary and shingle bank can also be had by continuing south out of the village, over the Stinchar, and immediately right on to a minor road leading to the cemetery. Just before this, fork right past Holmpark and Kinniegar farms and walk down the track towards the beach. Parking along this minor road can be difficult – be careful not to block the entrance to any fields.

Ballantrae is also on the main Ayr-Girvan-Stranraer bus route. For cyclists, the A77 carries too much heavy traffic to be ideal, though a visit to the nearby site of Knockdolian could be made by cycle from Ballantrae along the quieter B7044 which follows the Stinchar up from the south end of the village.

Park at south end of village (NX 082 825), view from carpark or nearby pavements.

A77 not recommended. Byway along B7044 a good link to nearby Knockdolian.

Ballantrae’s main attractions lie in its breeding species, offshore seabirds and migrants using the ever changing layout of the estuary. Three species of tern (Little, Arctic and Common) can breed, but disturbance levels are high and visitors are asked to walk along the shoreward edge of the shingle bar. Breeding waders include Oystercatcher, Ringed Plover and Common Sandpiper while up to pairs of Mute Swans and occasional Greylag Geese also breed. An eroding river bank near the mouth of the river holds a sizable Sand Martin colony in some years. Offshore, the seabirds can also be spectacular with winter and spring build-ups of divers, notably Black-throated, breeding season “strings” of Gannets from Ailsa Craig, and autumn movements of Manx Shearwaters. The area is perhaps under-rated as a migration stop-over and has held Osprey, Little Ringed Plover and Wood Sandpiper in recent years.