About 8km south of Ballantrae,the main A77 trunk road south enters the lower reaches of the valley of the Water of App. Along the main road there are two safely entered laybys from which the slopes of the glen can be scanned. Near the mouth of the river (at NX 052 724) asmall road to Finnarts Bay forms the entrance to a fish processing plant, but also leads to a large informal parking area overlooking the mouth of Loch Ryan. Turn in with care as the A77 carries heavy traffic. From here, once again, the glen can be scanned as can the entrance to Loch Ryan. By this park, too, the heavy scrub and woodland is good cover for small birds, especially at migration periods. The A77 through the Glen is not recommended for walking or cycling but a regular Ballantrae-Stranraer bus service follows the route. 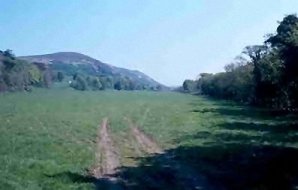 Car park at Finnarts Bay is very rough but parking nearby for wheelchair users should be feasible. Access also available along quiet road from Marberry Cottage on the B7027 to Barwinnock – 2 cattle grids on this unclassified road.

Glen App is a Site of Special Scientific Interest. The hillsides are comprised mostly of open moorland and conifer plantations but contain small deciduous stands too. A good range of raptors can be expected, soaring and hunting along the skyline, with Buzzard, Kestrel, Sparrowhawk and Peregrine likely and Hen Harrier possible. Other likely sightings include Raven, Dipper, Grey Wagtail, Tree Pipit, Stonechat, Wheatear, Garden Warbler, Blackcap, Whitethroat, Chiffchaff and Spotted Flycatcher, with Loch Ryan providing seabirds such as Red-throated Diver (Sep-Apr), Fulmar, Eider and Black Guillemot.

While exploring Galloway, a trip to the group of lochs near Drumlamford House (NX 288 765) on the B7027 south east of Barrhill is worthwhile. The route from Ballantrae along B7044, A765, A714 and B7027 passes through a rich and varied habitat, all of it along river valleys and with many opportunities for wayside stops. Three of the five lochs, Nahinie, Dornal and Maberry (the latter two extend into Dumfries and Galloway), can be scanned from the roadside.

These are upland lochs surrounded by small reed beds, conifer plantations including good stands of Scots Pine, some open moorland and small areas of mature broadleaf woodland. Among the likely sightings are Grey Heron, Greylag Goose, Tufted Duck, Buzzard, Sparrowhawk, Black-headed Gull, Common Gull, Tree Pipit, Whinchat, Blackcap and Crossbill but there are many other possibilities such as the scarce Willow Tit.