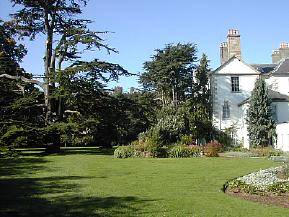 These adjacent parks on the south side of Ayr (Rozelle at NS 4 19; Belleisle at NS 19) contain a wide variety of habitats, encompassing open grassland; coniferous, deciduous and mixed woodland; scrub; ponds and the Slaphouse Burn. Consequently, they are rich in bird life, despite their suburban location. Indeed, over 110 species have been recorded.

Given their suburban location, many of the common garden birds, such as Blackbird, Song Thrush, Wren, Robin and Dunnock can be easily seen. However, there is much more to be seen.

Both parks boast large open grassland areas, especially Belleisle with its golf courses. These areas attract gulls and Rooks throughout the year, with Redwing and Fieldfare flocks regular in winter. Small numbers of waders can also be seen on the fields occasionally, with Curlew, Oystercatcher, Snipe and Woodcock the most likely species. In summer, flocks of Swallow and House Martin often gather to feed over the fields.

Hunting Kestrel are a regular sight over the golf courses at Belleisle, whilst sizeable flocks of Meadow Pipit and Skylark can occur in the autumn.

The woodland areas hold the highest diversity of breeding species. Rozelle is the better of the two parks for woodland species due to its greater mix of woodlands. However, Belleisle should not be overlooked as it contains a large Rookery, breeding Stock Dove, Tawny Owl, Blackcap and Chiffchaff among others. Additionally, Rozelle can provide Spotted Flycatcher, Great Spotted Woodpecker, Sparrowhawk, Wood Warbler and Siskin.

In the autumn and winter the woodlands provide food and shelter for a wide variety of species. Finch flocks can be quite large and number hundreds of birds. Chaffinch and Siskin are the most regular with Brambling very common in some years. The best places to look for finch flocks are around the strands of Beech trees or in the rough weedy areas. Crossbills also occur erratically, usually in the Spruce plantations behind the ponds in Rozelle. This area often holds one or two Jays. Roving tit flocks should not be ignored as they sometimes contain the odd Willow Tit or over-wintering Blackcap or Chiffchaff.

The ponds in Rozelle attract a wide range of wildfowl despite being almost surrounded by trees. Around 20 pairs of Mallard breed annually along with 4-5 pairs of Moorhen, and Little Grebe bred in 1992. Other suck species recorded fairly regularly include Goldeneye, Shoveler, Pintail and Gadwall, whilst oddities like Mandarin and Smew occur occasionally. The ponds also attract other fish-eating birds, with Cormorant and Grey Heron often present. It is also worth keeping an eye open for Kingfisher.

Continuing with wetland habitats, the Slaphouse Burn and its banks are also home to Grey Heron, Kingfisher, Moorhen and Mallard. Other species to be seen along the burn are Pied and Grey Wagtails, Reed Bunting, Sedge Warbler in summer, and Snipe in winter. Flocks of Siskin and Redpoll numbering up to 50 are regular on the burn-side Alders in autumn and winter.

Being close to the coast, it is often worth looking up as many birds over-fly the park. The parks lie on the regular flight-line of gulls and waders heading to the coastal roost at Doonfoot. Black-headed, Common and Herring Gulls can be seen in thousands towards dusk, along with smaller numbers of Curlew and Lapwing in autumn.

This description has been published in the leaflet Birdwatching around South Ayrshire produced by South Ayrshire Council and is reproduced with their kind permission.