The whole stretch of coastline from Turnberry Bay to Girvan, with sand dune system in the northern part and raised beach throughout, is well worth a look at any time of year. Unfortunately, the A77 trunk road carries fast and heavy traffic and this is an accident black spot. Extreme care is needed when parking, even at official lay-bys, and cycling is not recommended. There is a regular Maybole-Girvan bus service which makes appropriate stops. 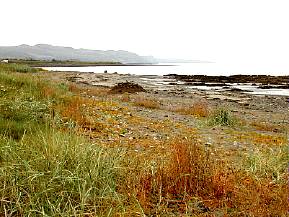 The only recommended safe access is at Dipple (NS 201 024). Approaching from the north, and opposite Kelco alginate factory, an entrance on the left leads to a section of the old coast road, with a number of cottages and a telephone box. A bus stop lay-by lies immediately beyond. Park on the old road with consideration for the occupants of the cottages and cross the A77 on foot with care. 100 metres south along the factory fence line, a track leads down to the shore at the mouth Lady Burn from where the shoreline can be explored. If coming from the south, go past the site by 1km rather than risk a right turn across the traffic at this poor visibility section, and reverse your route from Dowhill Farm on your right, into which the right turn has been made safer.

Other approaches to the coast can be made from Turnberry village near the Milton Burn (park at NS203 055 and follow footpath to shore), Chapeldonan (NS 193 004) and Girvan Mains (NX 192 993), which are described later.

Dipple is a good, compact area from which to look for divers and sea-duck. The foreshore is partly shingle and not so good for waders, although the stretch near the alginate factory is worth inspection. From late August till May, divers can usually be found offshore, with the Red-throated being the most numerous. However, small groups of Black-throats form here, normally from late November, becoming more numerous as spring progresses, with late March-early April being the best time to see them. Great Northern Diver is the least numerous species. Again, this area is good for Eiders and a search through them from October to April can usually turn up a few Goldeneye, Scaup, Common Scoter and Long-tailed Duck. The most numerous waders are Oystercatcher and Redshank which usually roost near Curragh (NS 197 017). Look carefully in the fields from early October onwards for large flocks of Twite which assemble here until late March. Local rarities have included Surf Scoter, Black Redstart and Water Pipit while an over-wintering Ruff, and a Swallow on the first of December have also added a bit of excitement to this stretch of coast.

Other Approaches to the Coast

On the A77, about 1km south of Turnberry village, a small black hut near the shoreline on the west side of the main road is the most obvious landmark. Although a small track leads down to the beach here, parking is extremely dangerous, and the area should be accessed from Turnberry village (see above). A short walk southwards along the beach will lead you to Balkenna. Like most of the bay, this sandy stretch is particularly good for divers with a variety of wildfowl and waders too. The best time to look for divers is usually early spring, with late March to early May being best. At this time good numbers of Red-throated, Black-throated and Great Northern Divers may be present, although calm conditions are necessary to get the best out of this site. The shoreline can support high numbers of roosting and feeding waders with the spring and autumn passages frequently providing the unexpected bonus of a Black-tailed Godwit, Greenshank or Ruff. Watch out for Whimbrels, particularly in May, since numbers here can reach sixty or seventy. High numbers of Curlew, Ringed Plover and Oystercatcher roost just to the north of Balkenna with the fields behind the beach often holding these birds, pushed off the beach by high tides. Wildfowl in the bay include Eider, Red-breasted Merganser (an autumn build-up occurs in this area with around 150 birds in mid-late August), and a small flock of wintering Wigeon at the mouth of the Balkenna Burn. Local or national rarities can occur, with Hobby and White-rumped Sandpiper being two recent examples.

A recently metalled track leads down from a gate at NS 193 004. This is usually open since it allows traffic into the new sewage treatment plant on the foreshore at NX 190 000. However, it might be prudent to park at the gate and walk down to the shoreline since the gate may well be locked when the plant is in operation. This tends to be the least productive stretch of the whole area, with a rock and shingle foreshore, although the cultivated fields are well worth a look in the autumn to spring period. Most of the common species of diver, sea-duck and wader occur along this bit, but the most notable change in recent years has centred on Goldeneye, numbers of which have fallen from around 750 to a mere handful due to renovation work on the sewerage system for the Girvan area. Likewise, a small, but regular, flock of Scaup has virtually disappeared. With fields of turnips and potatoes dominating the farming scene, it’s well worth looking through wintering finch flocks, especially after the onset of hard weather. Apart from numbers of Twite often exceeding 00-400, birds such as Linnet, Chaffinch, Greenfinch, Goldfinch, Brambling, Lesser Redpoll (and occasionally Common Redpoll), Snow Bunting and Tree Sparrow come into the weedy fields during cold spells. Skylark numbers can often reach 00-400 at such times too. Obviously this attracts raptors, and Sparrowhawk, Merlin, Kestrel and Peregrine can all be seen frequently hunting this area.

Park at the farm, outside the entrance gate (NX 192 993) and walk, via the farm forecourt, to the shoreline. Although the farmer is generally sympathetic towards birders, take care to watch out for moving farm vehicles. A walk from the farm down towards the shoreline can be quite productive in the winter, with large finch flocks attracting raptors into the area. Much of this, of course, depends on what has been grown on the adjacent fields. However, there’s usually something of interest, even if it is the local farmyard Collared Doves which initially catch your attention. This was the site of Scotland’s second recorded breeding for the species back in 1959, although the birds may well have been around for two years previously. Yellowhammer can usually be found around the farm steading and the fields on either side of the track can be worth a close look for other passerines, as Snow Bunting may well occur in hard weather. Since the shoreline here is much like that at Chapeldonan, you should look out for Turnstone and, occasionally, Purple Sandpiper which over-winter here in small numbers. With the closure of the effluent pipe which carried much of the waste from the nearby Grant’s distillery, lots of wintering ducks have departed the area, no doubt heading for the next duty free outlet! A few Goldeneye remain, but it is still worth looking for the odd stranger since Velvet Scoter and Little Gull have both popped up here in past winters, as has Black Redstart on the foreshore.