These notes relate to one of 4 way-marked trails in the vicinity of the village of Barr (NX 275 940) in the hills ESE of Girvan. Information on the trails, including maps,can be had from www.ayrshirepaths.org.uk or from a free leaflet available from the dispenser at the forest car park which is the official starting point or from tourist offices or public libraries. The notes draw freely on the published leaflet and full acknowledgement is due to its authors.

Ayrshire Paths is an initiative supported by various organisations including Scottish Enterprise Ayrshire, Scottish Natural Heritage and the three Ayrshire Councils. They have signposted and improved many traditional walks and pathways around Ayrshire and have a continuing programme of development. 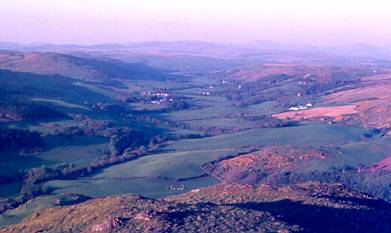 Nearly 5km of paths have been joined together to form circular routes by riverside, forest and open hill, very typical of southern, inland Ayrshire. Access is thanks to the goodwill and generosity of the landowners: Forest Enterprise and W A F Cuninghame. Of the 4 way marked routes, The Devil’s Trail, coded purple and some 6.5 km long has the greatest diversity of habitat for birds. To reach the start, turn inland from the coastal A77 just north of Girvan and follow B734 up into the hills to Barr. The road winds over typical grass and moorland, good birding for the passengers, but the driver will need concentration. In Barr, where B734 goes sharp left at the Inn, continue straight on along a rough single track road for 1 km, then left at a fork to the forest car park and official start of the trails.

Since, however, Barr is a beautiful village, and the 1km track is itself excellent birding along the wooded banks of a sparkling, clear burn, there is much to be said for parking in Barr and proceeding on foot.

A network of suitable routes converge on Barr, including a forest route from National Cycle Route 7.

The walk begins along a forest road beside the Water of Gregg, passing through or beside well-established deciduous and coniferous woodland and open scrubland. As the track winds through the glen, views of open hillside and recently planted moorland emerge. Look out for the glade with bat-boxes. After some 2km, the trail leaves the forest road, and climbs steeply through mature conifers to a highest point with breathtaking views across the Stinchar Valley to the hills beyond. It then plunges down a gully and across the Changue Burn to reach the far hillside at High Changue from where it returns by a forest road with deciduous and coniferous woodland to the north and open views over farm, forest and moor to the south.

Almost anything in the way of inland birds is possible since all habitats are represented. The following is a sample from my own experience. In season, Spotted Flycatcher abound along the access road as do Coal, Blue, Great and Long-tailed Tit all year. The squeak of Goldcrest is ever present. Willow Warbler, Chiffchaff, Blackcap and Garden Warbler are common in summer and I have heard Wood Warbler on occasion but not yet Grasshopper Warbler, though the terrain seems suitable and they are certainly present in the vicinity. Treecreeper breed in numbers and I have heard Great Spotted Woodpecker but not Green Woodpecker. The ubiquitous Chaffinch are there in numbers as are Linnet, Siskin, Goldfinch and Greenfinch and the occasional pair of Bullfinch. On the highest part of the trail I have had several excellent close sightings of Crossbill. House Sparrow is still to be seen but not a single Tree Sparrow so far. Dunnock, Robin and Wren, of course, are around in numbers, and Stonechat but not yet Whinchat or Wheatear, though some of the other trails which take to the moors should yield them. On the far hillside, by the farm, a Redstart held territory one year. Meadow Pipit are common; I must look out for Tree Pipit. Both Pied and Grey Wagtail inhabit the glen. I have never seen a Dipper, which is a curious omission. All three common thrushes breed here. In spring and autumn many hundreds of Redwing and Fieldfare have been seen passing through. Several pairs of Buzzard have territories along the walk, and Kestrel have been seen quite often; Peregrine on one occasion; Sparrowhawk and Merlin not yet – I keep looking, the habitat is right. The open moor and young plantation zones should suit Hen Harrier and Short-eared Owl. I have heard the atmospheric deep croak of Raven as a pair passed over the glen.

The other walks extend the range of habitat to include cleared forest and extensive open moorland. The approach roads to Barr pass through stock and arable farmland and over open moorland and young plantations. There is ample scope to stop and look. Since the whole area is close to the coast by Turnberry and Girvan, a combined coastal and inland birding trip is easy to organise – and an attractive Ayrshire village stop makes a pleasing objective for all the family for the day.

Legend has it that near High Changue, there is the site of a famous battle between the Laird of Changue and the Devil. The story goes that Changue was getting short of money and he decided to make a bargain with the Devil. He would sell his soul in return for great wealth.

The Laird’s fortunes changed and he prospered for many years. When the time came to deliver his soul the Laird reneged on his bargain and refused to go. The devil proceeded to lay hold of him, but Changue, placing his Bible on the turf and drawing a circle with his sword around him, sturdily and, as it turned out, successfully defied his opponent.

The story must be true because to this day, on the hill above High Changue you can see the Devil’s footprints, the circle drawn by the sword and the mark of the Bible clearly visible on the grass.