The Knockentiber to Springside section comprises part of the former railway line running between Kilmarnock and Irvine and has been converted into a footpath/cycle path/farm access path following dismantling.

Access the line from the north side of Knockentiber village on the B751 at OS grid reference NS 400 96 or the unclassified road to Kilmarnock at NS 404 95. Access at the north end of Springside on Overton Road (to Warwickdale) at NS 69 91 or via the farm track (which crosses a stubble field in winter) at NS 69 93 which will direct you onto the line approximately 0.5 km east of the village. While it is a 4 km walk from end to end, the areas of greatest interest are actually around the villages. Park in either village and walk the path in either direction. It is an ideal site to cover by bicycle. Alternatively, an unclassified road from Knockentiber to the Cunninghamhead area crosses the line approximately half way where there is space for roadside parking on the left after the bridge.

Park at side of road (not ideal). Long ramp down to cycle track at Knockentiber, gentle grade at Springside.

Part of National Cycle Route N73, Irvine to Kilmarnock. The track between Knockentiber and Kilmarnock has been recently surfaced. 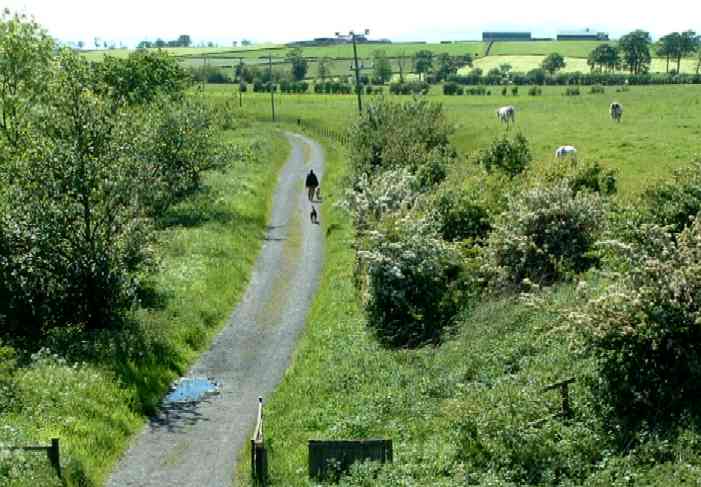 The disused railway line is a rich, semi-natural, linear habitat of overgrown hedgerow, scrub and rough grassland verges traversing some fairly interesting farmland. The land is drained by the Garrier and Woodhill Burns. Smaller areas include a juncus rush marsh, bramble-strewn wasteland, nettle beds, bricks and mortar and a marshy cutting on the line (before recently introduced drainage). However, recent tarmac “improvements” at the Knockentiber end have damaged much of the habitat, although hopefully within time the area will recover. Fly-tipping, burnt-out cars and illegal shooting are all a problem here from time to time.

Birdwatching, Timing and Points of Interest

Free from busy traffic, the line offers a good vantage point to observe typical farmland birds of Ayrshire and to connect with the locally rare Tree Sparrow. The density of breeding warblers and buntings is particularly high for the area. Average figures for the 1990’s: Willow Warbler (26 territories and upwards of 5 singing males during spring passage), Whitethroat (12 territories), Sedge Warbler (12), Grasshopper Warbler (3-4), Blackcap (2), Reed Bunting (4-5), Yellowhammer (14). Early mornings in May and June are the most productive months in terms of diversity and birdsong. September to December for passage, winter and more unusual species. Late winter is rather quiet. A total of 83 species has been recorded since 1991.

The following points along the line are of particular interest:

Fifteen species of butterfly have been recorded including Grayling, Orange Tip, Small Heath and Clouded Yellow. Black Darter and Common Darter dragonflies are abundant (August to October) at the Knockentiber end. It is also interesting for flowering plants and Roe Deer at the Knockentiber end. Surely this green corridor for wildlife should have some sort of conservation status as it deserves to be protected from further degredation.