This part of south Irvine is actually a collection of six areas good for wildlife all within two kilometres of each other. These are mostly managed by the Scottish Wildlife Trust. For convenience they can be split into two groups which we’ll call North and South.

For this group it is recommended you park in the small reserve layby just off the A737 at NS 26 70: heading north into Irvine from the Shewalton junction of the A78 it is on the right just after Shewalton Cemetery. 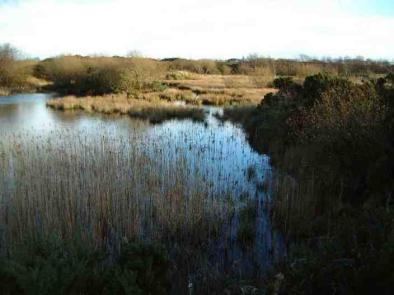 From the layby go down the path to the reserve. There are a couple of ponds surrounded by scrub and reeds. This area was reclaimed from disused sand and gravel works. It is particularly interesting for plants and butterflies. Extensive work done by the SWT in 2009-10 has restored this area, especially the ponds and cleared the network of paths. These go round the ponds and over to the River Irvine.

From the layby walk back and cross the A737 and enter the area via a gate at NS 25 71. A circular path goes round a pond with stretches of wood, gorse and scrub. The pond has Coot, Moorhen and breeding Mute Swan. In winter it also attracts Whooper Swan. The trees (a mixture of conifer and deciduous) support Siskin, various tits, finches and the commoner summer migrants.

The second group is on the other side of the A78. For this group it is recommended you park in the small SWT reserve car park near the paper factory at NS 7 57. From the Meadowhead Roundabout head towards the paper factory and pass the water treatment works on the left, after which a small track on the left goes down to the car park. This is on National Cycle Route 7.

From the car park follow the cycle path to start a circular walk that would take roughly an hour. Almost immediately take a track on the left and follow a water pipeline to some ponds at NS 49 61. The ponds and surrounding scrub have Grasshopper Warbler, Whitethroat, Reed Bunting and Sedge Warbler in summer, and the adjacent fields have Whooper Swans, Teal, Redwing and Fieldfares in winter. Map 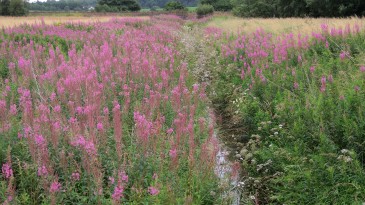 The path continues and enters a section of birch woodland which has Coal Tit, Goldcrest, Long-tailed Tit, Siskin, Great Spotted Woodpecker, and Redpoll. You emerge from the trees into a large expanse of rough grassland on the former raised bog, remnants of which persist close to the capped landfill site in the centre of, but not officially part of, the reserve. Buzzards breed and Hen Harrier is a winter visitor over the Moss. Foxes and Roe Deer are commonly seen. Keep your eyes peeled for adders basking on the edge of the path. The Moss is where I always get the first singing Skylark of the spring.

The path continues along the side of the Troon-Kilmarnock railway line (still in use, though only occasional trains pass) and rejoins the National Cycle Route at the south end of the paper factory. The trees here have Woodcock as well as the usual suspects. In 2009 15 hectares of conifer circling the reserve were felled to convert the area to native broad-leaved woodland. This is rapidly being colonised with wild flowers, and native tree species. A project The Shewalton Wood Tree Nursery is underway to provide a source of trees grown from seeds of Ayrshire provenance for use in local reserves.

In winter at dusk it is worth visiting the paper factory carpark to watch the roosting Starling flocks come in. These often attract Sparrowhawks which adds to the excitement!

From the car park walk back towards Meadowhead Roundabout and opposite the pumping station (NS 6 59) take the cycle path to the left (signposted to Irvine Station). After about 200m the flooded pit appears on the right (NS 3 63). Gulls rest here after a busy scavenge in the local tip. Cormorant, Coot and Little Grebe all breed. In winter ducks such as Tufted Duck, Scaup, Pochard, Goldeneye are common as well as occasional visitors such as Goosander and Long-tailed Duck and swans (Mute, Whooper and even Black!).

By continuing along the cycle path from Area Four a foot bridge crosses the A78 and emerges at a busy minor road. Cross this and turn right towards the mini-roundabout. Continue along the cycle path as it heads left. After 400m on the left is Gailes Marsh: another SWT reserve. It is also possible to park on the grass verge at the edge of the reserve near the water pumping building.

Cross the style to enter the reserve which comprises coastal grassland, open water, marsh and woodland combine that supports a diversity of plant and animal life. It is particularly important for plants, amphibians and butterflies (work to re-introduce the Small Blue started in 2010).

In 2010 an artificial Sand Martin colony was constructed at the south of the reserve. This proved to be an immediate hit with 15-20 pairs moving in that spring.

It is easy to overlook this SWT reserve as it hides away in the area north-west of the Meadowhead roundabout on the B7080. It consists of a couple of ponds connected by a path leading to a viewpoint. Although not a major attraction on its own, when combined with the other sites in this group, it nicely rounds off a visit. Parking is a little tricky as this road is busy: the best idea is to park nearer the paper factory and walk. Map of boundary

The ponds attract the usual waterfowl including Whooper Swan in winter, and Kingfisher. The scrub area is also good for the usual summer migrants.