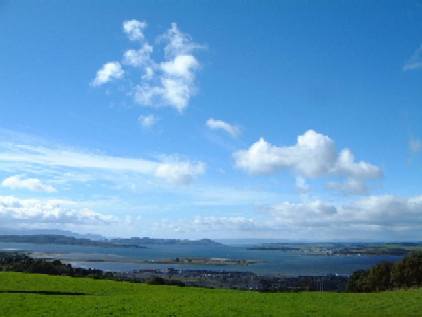 The main site is a shallow, tidal bay on the southern outskirts of Fairlie where the burn down Fairlie Glen enters the sea. The bay can be viewed from a roadside car park on the A78 (NS 207 543) or from the car park and picnic area, with toilets, on the promontory at Burnfoot (NS 206 546) on the south edge of the town. Failrie railway station is within 0.5km and buses run along the A78 regularly. The coastal cycleway passes the site.

Park in lay-by (not ideal) or at promontory, no disabled spaces.

Nearby to the south there is an enclosed lagoon which was created when an ore terminal was built in the seventies. This can be viewed by following the footpath on the south side of the bay and up the bank on the northern side of lagoon to an overview of the site. It is possible to enter the terminal and ask permission at the barrier to use a hide on the south side of the lagoon – proof of membership of a bird club may be required. Park in a small car park on the right just inside the barrier and walk the short distance to the hide.

Wheelchair access to hide down gently sloping paved footpath. Hide adapted for wheelchair use. Unsurfaced track around the bay finishes up a steep grassy slope to view lagoon.

Adjacent to the Ardrossan to Largs coastal cycle path.

The bay is at its best in winter as a site for waders and sea duck. It is the best site in Ayrshire forwintering Greenshank. In the spring and autumn it can be visited by Bar-tailed and Black-tailed Godwit. The pier for the terminal can have good numbers of Eider and Goldeneye with small numbers of Red-breasted Merganser. The burns on the south side of the bay and at the picnic place car park can be good for Dipper and Grey Wagtail.

The lagoon has an island which is used by many of the bay’s birds at high tide. In summer, it has a breeding colony of gulls and, in some years, Sandwich Tern. The island is also used by Grey Heron as a roost – 10 or more can sometimes be seen.

The trees which are planted on the southern embankment between the bay and the lagoon have many fruiting species that attract thrushes in the autumn. Waxwing has been seen here on occasion.