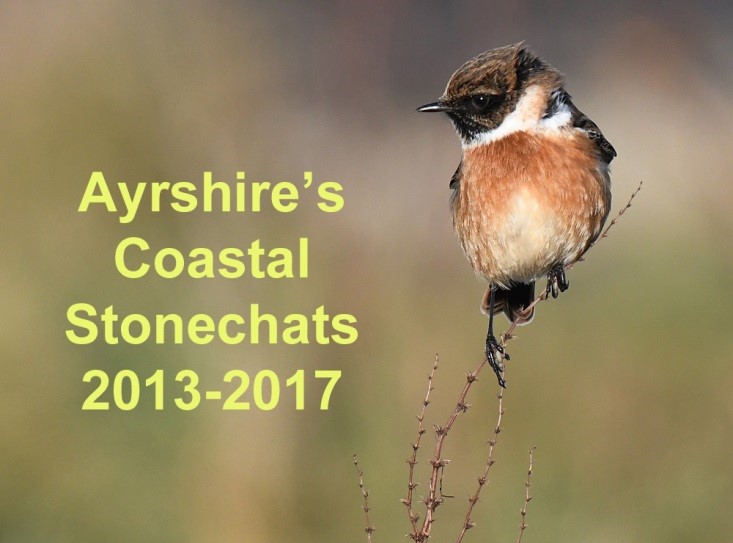 A survey in 2013 of most of coastal Ayrshire’s Stonechat breeding population was undertaken, mostly by volunteers from the SOC or RSPB, following the devastating effects of the 2010 and 2011 winters.  With a run of milder winters from 2013 onwards, it was hoped that there might be some improvement, although the rate of recovery was unknown at that time.

Many observers continued to send records in on an annual basis, and it became possible to identify the rate at which some coastal territories were being reclaimed by this species.  Fifteen stretches of coastline in particular were visited, when possible, during the breeding season and the number of pairs holding territory within each was recorded.  Casual records for areas outwith those mentioned in Table 1, were also recorded, to give a rough idea of the overall rate of recovery in the county.

Although, in many cases, observers noted breeding outcomes, this article concentrates only on territorial occupation and those territories occupied by breeding pairs.  In some cases, notes were also made on habitat alteration, particularly that which might have affected the presence of Stonechats.

A small band of observers, to whom I am very grateful, continued to provide information on coastal stretches southwards from Ardeer from 2014 to 2017, and a total of 15 such sites were covered regularly enough to enable the provision of data on the number of territories occupied in each (Table 1).

The area of each of these stretches varies greatly, and it would be wrong to assume that all were visited with the sole intention of obtaining Stonechat breeding information.  In many cases, observers were involved with other survey work at the time e.g. breeding seabirds, and took the opportunity to note the current state of play with Stonechats.  However, a good idea of the location of Stonechat pairs within these sites was well known from previous years.

Although a general improvement in territorial occupation since 2014 was noted, there were some losses too.  Three areas (Finnarts Point, Dove Cove and Bennane Lea) showed a negative trend with possible reasons being due habitat change or shortage of suitable habitat.  The presence of two territories at Finnarts Point frequently alters, and the possibility of one pair moving into an adjacent area away from the coast is the most likely explanation for the disappearance of one pair.  The territory at Dove Cove is marginal, with limited availability of nesting sites.  Bennane Lea is harder to explain but, once again, movement into a nearby area, which was not covered, is a distinct possibility.  The other area to record a drop in its recorded territories was Bogside/Ardeer, but this is such a large and difficult area to cover that the recorded results could be unduly pessimistic.

There was a slow and steady recovery in many places e.g. Dipple to Doonfoot, where the first indications of re-occupation came during late autumn as males took up territories and held on to them through the winter.  Perhaps the most spectacular return came in the Pow Burn and Troon South Beach stretches where the abundance of gorse scrub and rough coastal grassland has been maintained.  The fact that these areas, along with the Barassie to Irvine stretch, show a very positive trend is largely due to the excellent coverage provided by just one observer who has kept a very careful eye on the territories there.

As mentioned above, there was no requirement in the survey to note broods or brood sizes, although this was done in a few cases, but observers were asked to try to ensure territorial occupation/maintenance by Stonechats.  Proof of this could range from a pair’s observed presence throughout the year to singing males regularly seen in the same area during the breeding season.  Additional evidence might involve a bird watched carrying food to a likely nesting area or the vigorous defence of a possible nest site.

During 2013 no fewer than 36 coastal areas were visited and the results provided both a good comparison with 2010 figures – a baseline against which future results could be measured.  Comparing like with like is always difficult over such a large geographical area and one or two changes occurred in the years following 2013.

Firstly, one or two sites were dropped or amalgamated e.g. Downan Hill and Lendalfoot, and Fig 1 below shows the change in the overall number of sites visited.  Since 2013 the number of sites checked has fallen to a more manageable 17 – 2015 was unusual due to observer effort being poorer, but this picked up again in 2016.  Secondly, it’s noticeable that the number of territorial pairs has risen (allowing for the aforementioned “blip” in 2015), returning to a much healthier position than that which existed in 2013.

Very little habitat change occurred within any of the sites visited, apart from some minor scrub removal, but there would appear to be one or two points worth noting when it comes to the continued well-being of the species within Ayrshire.

How fast has the recovery been?

The 2013 survey revealed that Stonechats breeding along the coast with Ayrshire had made only the slowest of recoveries in a few areas, and were still missing from many of their former haunts.  Many, if not most, of the birds which breed in upland areas well away from the coast, appear to move out in winter as the food supply diminishes, and there are relatively few records of inland birds from November to March.  On the other hand, coastal territories are maintained, often by pairs, throughout the winter period.  This strategy works well providing winters are mild and the food supply holds up.

A prolonged period of severe winter weather will deplete the coastal numbers, but 2 consecutive winters, during which lying snow is glazed over by thawing and re-freezing, can prove lethal to a wide range of wintering birds.  However, Stonechats, like many small passerines, have a high replacement rate, frequently raising 2 broods, so it’s maybe not too surprising to expect a breeding population to bounce back fairly quickly after a setback. Just how fast that recovery has been can be assessed from Fig 1.

2014 proved disappointing inasmuch as there was little sign of the species reclaiming ground, apart from the stretch between Troon South Beach and Ardeer.  Territorial Stonechats were under-recorded in 2015, but both 2016 and 2017 show a steady recovery.  In essence, it has taken between 5 and 6 years for coastal Stonechats to climb back to their pre-2010 level, with the first 3 or 4 years showing very limited or no recovery.  For a bird which decides to over-winter on its coastal breeding territory, the risks are clear, but this hardy little passerine has demonstrated the ability to make a relatively speedy return after a serious setback.

None of these results would have been possible without the help of many local observers – I am extremely grateful for all your hard work in obtaining the data.  A full list of observers appears at the end, but I would like to offer special thanks to Jean Anthony who continued to keep careful records for the stretches between Pow Burn and Irvine – a major effort, and one for which I’m very grateful.  Others who contributed to the survey work include the following:-  F Alison, J&B Anthony, G Brogan, A Brown, T Byars, E Forrester, A&A Gilchrist, R Hissett, N J Lawrie, B Lennox, E Leyden, H Martin, G McAdam, P McEwan, G Macdonald, J&S Montgomerie, D Rackham, G S Riddle, J Rogers, T&G Scott, the late A Simpson, C Smith, J Thomson, R Turner, R G Vernon and the late D Watt.

I apologise for anyone unintentionally omitted from this list.