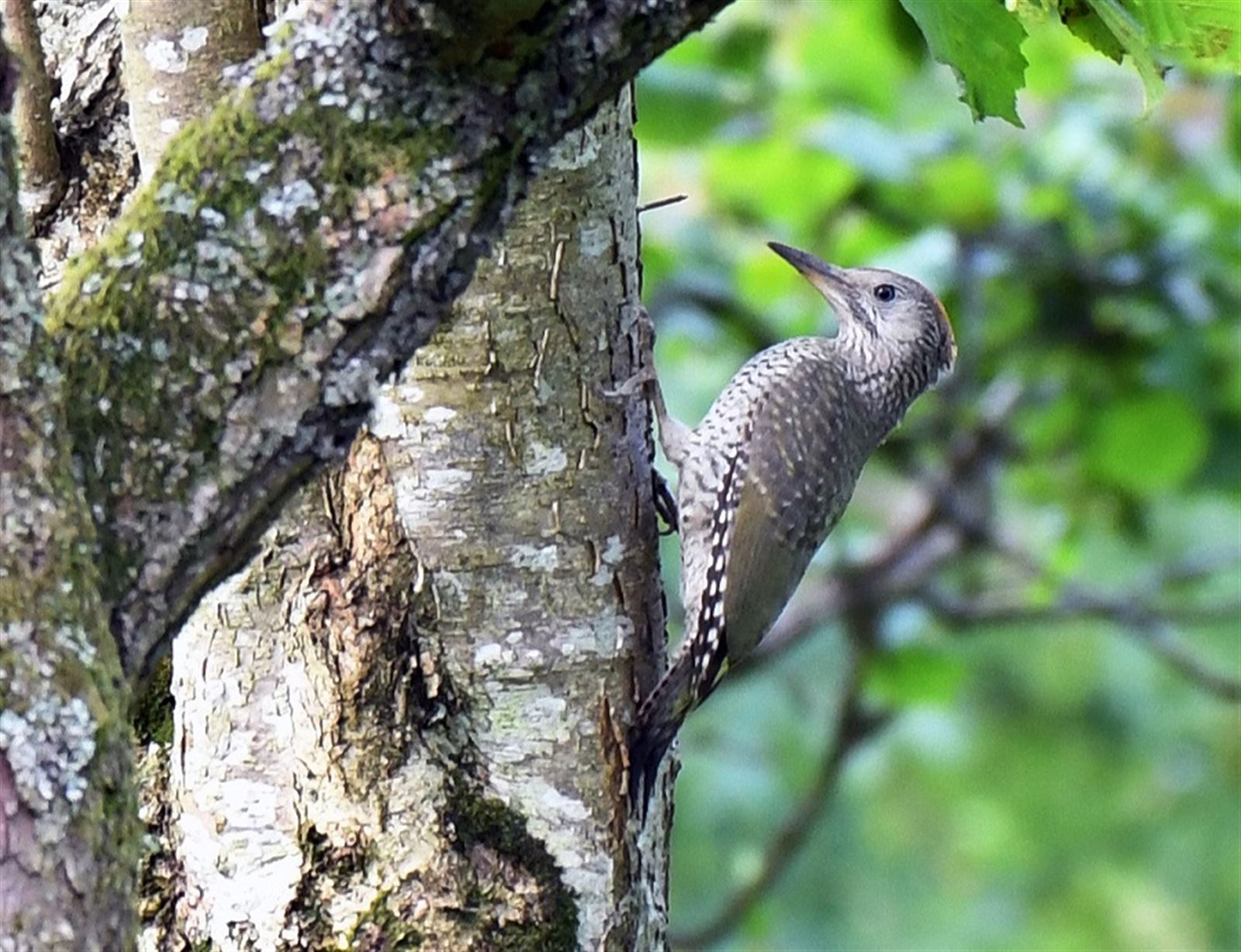 The Green Woodpecker (P. viridis) was first recorded in Ayrshire in 1925 when one was heard calling from the Blairquhan estate woodlands. Unfortunately, the bird was not seen, but the person who heard it was, apparently, well aware of the species’ rarity in Scotland at the time. Indeed, the bird scarcely gets a mention in South-west Scotland before this, and national records remained at a low level until the end of the 1940s.

The second Ayrshire record came in 1961 when a pair took up residence in “Central Ayrshire” and remained in the area for a few years, when another bird was seen at Alton Albany, Barr, in 1962. Breeding was not proved, although several nest-holes were found. For a bird which can be fairly vocal in the early part of the Spring when it is setting up its breeding territory, it can also prove quite tricky to obtain clear proof of breeding since it often becomes very elusive during the nesting period.

1974 saw the next Ayrshire record when one was present in the Portencross-Hunterston area between March and August. Three more records followed in 1977, when an adult was watched carrying food in Knockdolian Wood, this representing the first “probable” breeding record. A pair was present throughout the year “near Kilwinning” (possibly Montgreenan), and a single was observed at Sundrum in late May.

From here on, for a few years, the pace of colonisation picked up. It seems likely that a pair bred at Portencross during 1978, where a juvenile was seen on the 20th August. A pair remained at Knockdolian, and other pairs were noted at Kilkerran, Kelburn and Blair, all locations with large stands of suitable, mature woodland. Two Spring records of single birds were also recorded from the lower Girvan valley. An even bigger number of records came in during 1979, with the bird stated to have bred at 3 or 4 locations (Portencross-Hunterston, Fairlie and Knockdolian). It was also seen on single dates at 4 other locations – during this period the species was steadily expanding its range Northwards in Scotland.

In 1980 a pair reared 3 young at Hunterston, with other pairs noted at Portencross, Auchinleck estate and Knockdolian, and single records at 4 other sites. Pairs or calling birds were reported from the now customary areas of Hunterston, Portencross, Blair and Kelburn in 1981, as well as in Dailly and Dusk Glen. Only one record came from a “new” location, Glen App, during September.

A marked reduction in records came in 1982, following a harsh winter – something which Green Woodpeckers don’t appear to handle too well – with only 3 reports of individuals at Largs, Kelburn and Currarie Glen. Although 1983 and 1984 provided a wide scatter of records, the latter year including 2 birds at Fullarton Woods, Troon, during the first quarter, no breeding records were received. This decline was noted elsewhere in Scotland, with many Northern areas being forsaken and notable decreases witnessed in Southern regions such as Dumfries and Galloway.

In Ayrshire, 1985 saw a brief improvement, with a pair reported as probably breeding in North Ayrshire and other singles in suitable sites at Auchinleck estate, Barskimming, Kelburn and Hunterston. Interestingly, a single still hung on at South Wood, Troon in the early part of the year. Although 1986 saw a calling bird at its usual haunt in Kelburn during May, there were only 3 other reports of singles. Two more records of singles followed in 1987 and another two in 1988 when they were reported to have bred at Montgreenan. 1989 produced a further brace of records, with one of them at Tarfessock in April, providing a clue to the route which some of these birds follow to move into Ayrshire.

The 1990s began with two further records of singles, but no breeding reported. However, 1991 showed a slight improvement, with two calling birds in suitable habitat in North Ayrshire during May. It was said to have bred at a North Ayrshire location in 1992, and this was followed by an intriguing record during August when a sickly juvenile was collected by a golfer at Troon and taken to Hessilhead Wildlife Centre. Had it been reared locally? The woodland nearby at South Wood is certainly suitable, and Green Woodpecker has a surprising ability to avoid detection. A continued improvement was evident in 1993 when up to 4 territories were noted, 2 pairs reported to have bred, in North and Central Ayrshire. Four other records of singles occurred during the year.

Just when it seemed like a pattern of territory re-occupation was beginning to happen, 1994 produced only 3 records of singles. 1995 was little different with a pair at Brownmuir, and a single at Cuffhill on two dates. A pair was back at an old haunt, Portencross, throughout 1996, but only 3 other birds were reported from 2 locations. The Portencross pair were again present on 9th July 1997, and two other records of singles that year included a bird at South Wood. Just one midsummer record of a single bird at Kelburn in 1998 summed up the unpredictability of this species, while South Wood returned the only record for 1999 during March. This bird was present again during midsummer in 2000 – the sole report for that year. 2001 saw single birds back at Fullarton Woods in January, with others at Kilkerran and Irvine during May. April 2002 produced records of singles at Fullarton Woods and Portencross, but no more breeding records. Three further reports of lone individuals came in 2003 from Largs, Hunterston and Auchendrane, but 2004 was the first year in recent times when none were observed within the county.

It looked like we were about to lose the species from Ayrshire, with only single Spring records from 2005 and 2006. Three records of Spring singles in 2007 was followed by 2 from North Ayrshire in 2008 and 2 more in 2009. Three reports of individuals in 2010 involved 2 from formerly occupied areas, 2011 produced only 2 records of singles, and 2012 saw the addition of just 3 more solitary birds. No birds were reported once more in 2013, only one in 2014, and none in 2015. Apparently the potential colonisation of the 1970s and 1980s had stalled, and the bird’s range was shrinking Southwards. 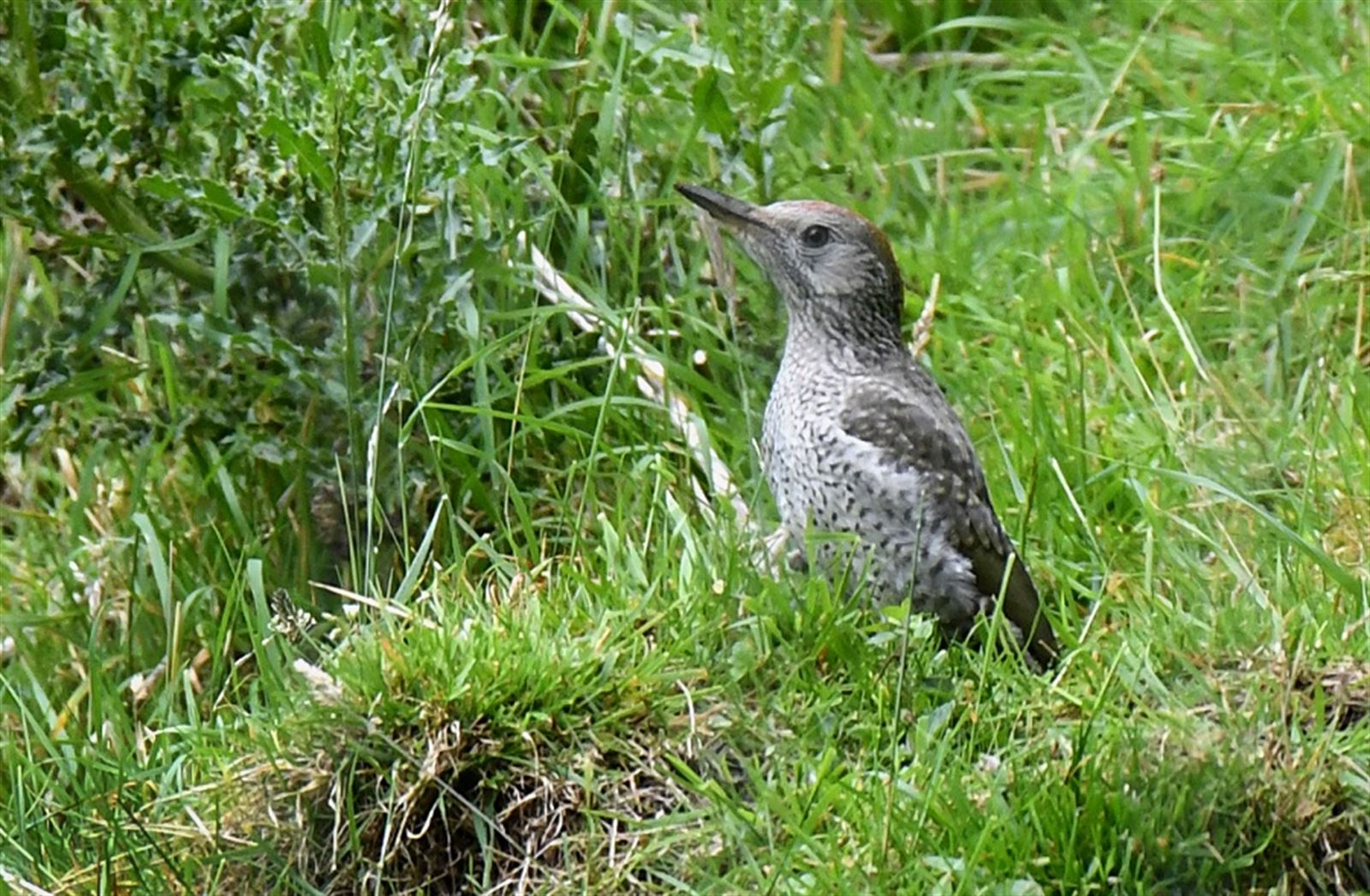 On 15th April 2016 a single bird was heard calling from the oak woodland at Craigencallie, Straiton. No sooner had it flown across the river and landed on a tree when it was chased off and caught by a female Sparrowhawk – a somewhat unfortunate re-emergence of the species within the county. There were only two further reports of single birds during that year. However, a check of the same woodland in early Spring 2017 revealed the presence of a pair. Repeated visits to the site revealed their continued presence there through May, June and July, by which time they had become considerably less vocal and often difficult to see. A likely nest-hole was discovered in mid-June and a visit on 31 July produced clear evidence that they had been successful, with 3 fledged juveniles noisily flying around. This is the first proven breeding record for 24 years, although it’s quite possible that breeding has gone undetected elsewhere in Ayrshire during this time.

However, in 2017, there were also 3 more records of single birds, raising the possibility that the species may be embarking on another push Northwards. This can be both a flamboyant and a frustrating species to watch, depending on the time of year but, for anyone visiting an area of suitable woodland in Ayrshire in the Spring, it would be worth listening for that “yaffle” call.