“Well, nobody looks at pipits!!”  An often repeated statement from birders and non-birders alike.  It’s perhaps understandable, since this little group of birds is maybe not the most glamorous.  Well, maybe I can persuade you to have a look at some of these “little brown jobs” since there’s a lot more to them than meets the eye (at least, in the first instance!).

Ayrshire currently has 5 species of pipit on its list, with the large Richard’s Pipit having been recorded on only a single occasion so far.  Of the four other species, Water Pipit is undoubtedly the scarcest, being a winter visitor from the European mainland.  Rock Pipit is the nearest to an omni-present species, with some migration taking place during Spring and Autumn, when some other races may be involved.  Tree Pipit is a Summer visitor and is usually present as a breeding bird in our upland forestry areas between mid April and September.  The one that most of us will be acquainted with is Meadow Pipit although it, too, is a migrant, with only a few choosing to overwinter.

So, let’s take two of these closely allied species to begin with and see how we can identify them.  Water Pipit and Rock Pipit used to be considered as the same species, but a recent “split” resulted in a separation – and one which seemed sensible to those of us who had suggested some time previously that their habitat choices, for one thing, were substantially different.  If we take Water Pipit to begin with, it’s important to know when to look for it in Ayrshire.  Since the first record in 1970, the bird has been well recorded within the county, and Ayrshire has proved to be one of the best counties in Scotland in which to see one.  It’s primarily a Winter visitor from its high montane breeding grounds in West and Central Europe and, while many will head South into areas like South Spain and the Balearics to overwinter, some head North-west to spend the Winter months in the UK. 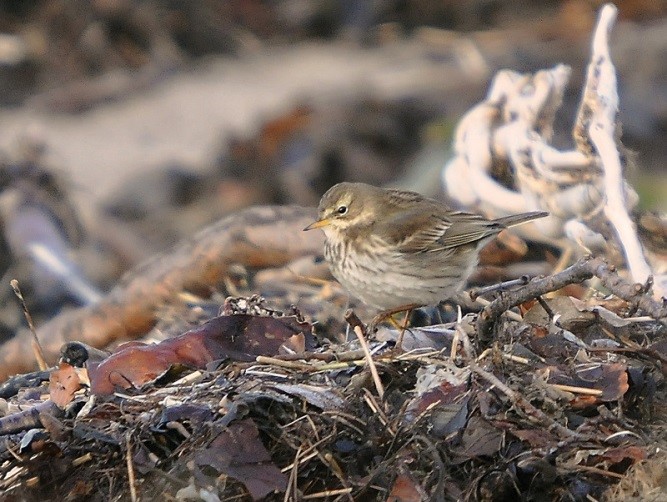 It was initially thought to be a bird which could be found in habitats like watercress beds and sewage farms in the Southern counties of England, with any suggestion of shoreline feeding on seaweed accumulations being dismissed.  This habitat has, however, turned out to be one which is frequently used by Water Pipits in our part of the world (Scotland is not blessed with a lot of Watercress beds!).  Very often these seaweed piles lie in sheltered bays or at the mouths of burns and rivers e.g. at Maidens and Doonfoot.  Most of our birds arrive from the end of October and depart for their breeding grounds in late March-early April.  During March they will undergo a body moult in which their appearance as a “different” species will become much more apparent. 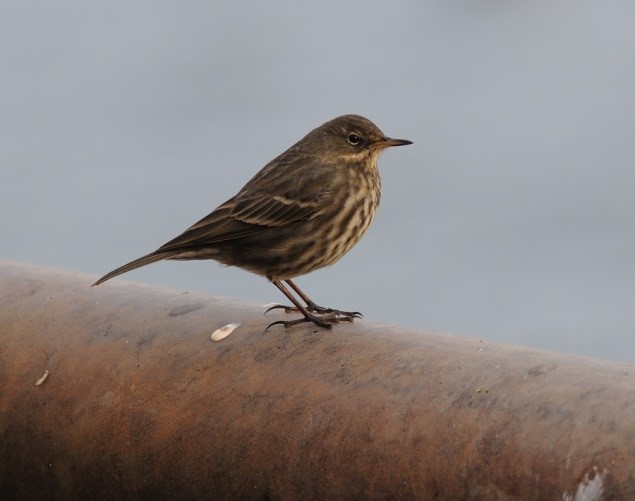 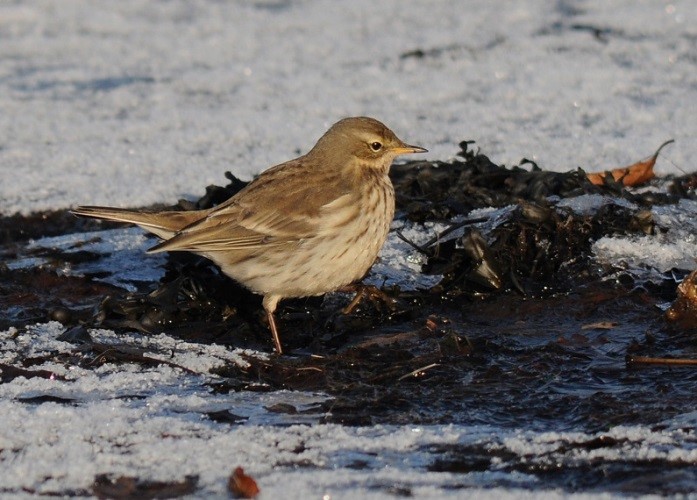 When they arrive in the late Autumn, you might be forgiven for thinking that the bird in front of you is just a bright-looking Rock Pipit. However, your attention might just be drawn initially to its unusual , flighty behaviour – quite different from most Rock Pipits, which normally allow fairly close approach. Secondly, once you’ve caught up with it, you’ll be aware of a bird which is largely white below and brown above; a contrast to most of the nearby Rock Pipits which are pretty drab with their olive-tinged grey/brown upper-parts and dull underparts, often with heavy, dark streaking in this area.

A closer look at the bird will pick out one or two other notable plumage features:- a clear white supercilium, two white wing-bars on the tips of median and greater wing coverts, a white or off-white throat, and white outer tail feathers, the latter feature showing well as the bird flies away from you again! The dark streaking on the breast can appear much finer than that of Rock Pipit, and is largely concentrated on the upper breast, thinning out on to the belly and becoming much more diffuse on the flanks. A brownish/grey back will show some dark streaking, but the rump is often a richer, warmer brown colour. The bill, which is usually more slender than that of a Rock Pipit, has a largely yellow base to the lower mandible and the legs are dark, often showing reddish brown (a useful feature if you’re unsure about a greyish Meadow Pipit perhaps?). With a lot of these features, it’s well worth remembering that light conditions will play a big part in what you perceive to be colours and tones. 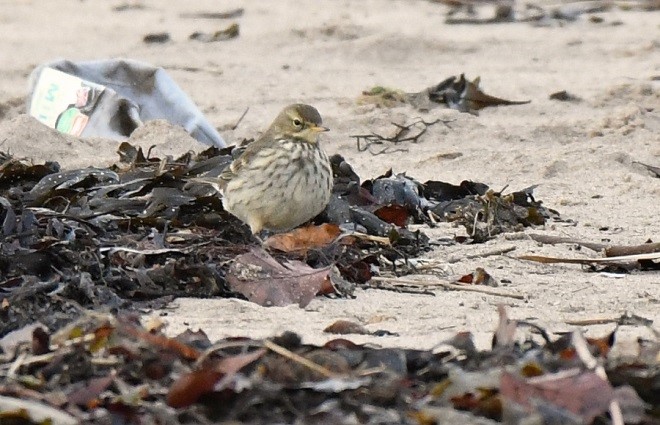 Most birds are fairly active feeders, and a good time to look for them is at high tide, when the seaweed will often be disturbed by waves lapping against it, perhaps unsettling invertebrate life within it. Above all else though, patience is the key, since most birds which take off and appear to fly for miles along the beach in front of you, will often return to exactly the same spot they were feeding in a few minutes beforehand. By mid March, if your overwintering bird is still around, you’ll start to see a few changes in its plumage. It starts to look quite scruffy and gradually takes on a pale greyish appearance. The white supercilium is still there, but now it’s set against a pale grey crown and ear coverts. The upper-parts become mostly pale grey and the dark breast streaking almost totally disappears, leaving plain white underparts with a pinkish breast. The top part of the head pattern can vaguely resemble a Northern Wheatear at times. It should be pointed out, however, that many birds will depart before they look like what most field guides show as typical breeding plumage. 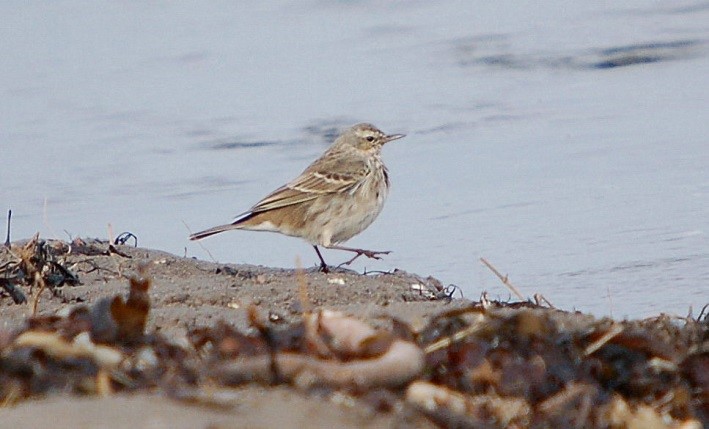 Other races of Water Pipit have been recorded within the UK, and it’s possible that the closely allied Buff-bellied Pipit could be a future addition to the Ayrshire list. That would require more folk to look harder at pipits though… so, how about it?

And you thought it couldn’t get any worse!  Well, truthfully, it could.  Although we now know that Water Pipits can be identified with a wee bit of care, identification of Rock Pipits is not so straightforward as many of the field guides suggest.  An example of this can be seen in the two photos below – both show Rock Pipits, but at different times of year:- 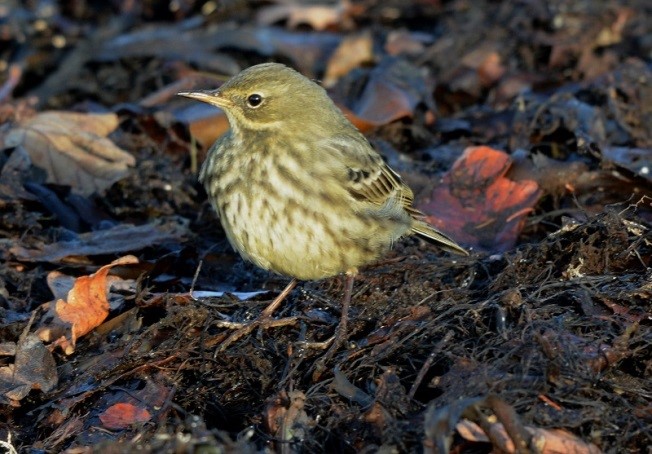 Both birds show many differences in plumage, and it’s hard to believe that it’s the same species you’re looking at! However, the two photos illustrate just how confusing it can be to identify what many people would regard as a “dull” bird (and not worth a second look?). So, how have we arrived at the point where we’re almost considering taking up stamp collecting? Well, the two birds look similar in size and structure: they share the same habitat: and they give the same call (OK, I know that’s cheating since you can’t hear a still photograph). The next step is to look at the plumages. The November bird looks really crisp, with a lovely olive-green cast to its upperparts, and fresh upper wing coverts with their dark centres and whitish tips. Sometime during the early autumn it would have undergone a post-breeding moult and is in excellent condition.

The July bird, by contrast, looks like it’s been dragged through a hedge backwards! Its worn, grey plumage shows little or none of the neatness of the November bird. The upperparts appear very plain and lack the greenish tinge of the other bird, while the upper wing coverts have all but vanished as a feature. Even the dark streaking on the breast looks worn and almost mottled in appearance. Well, it has just come to the end of the breeding season, and the plumage has obviously just lasted long enough. Time to moult!

Most of the Rock Pipits we have, locally, in Ayrshire tend to look like the November bird for much of the year and exhibit the following features:-

There are other plumage features but, bearing in mind that the rigours of the breeding season can alter the colour and tone of the plumage (and the timing of these changes varies from bird to bird), have a look at the two photos below:-

See if you can guess the month in which the two photos were taken (click on the photos to expand to full size).  Answers at the end of the article.

Strangers on the Shore

I guess I’d be giving my age away if I referred to Acker Bilk here.  However, the point of this section is to highlight something which very few people notice during the Spring migration period i.e. many of the migrant Rock Pipits which occasionally gather on seaweed piles don’t look like our birds.  Rock Pipits are migratory, although seldom forming large aggregations – a “flock” of 20+ would be notable.  During March and April, around the time when many White Wagtails throng our shorelines, you’ll sometimes notice small numbers of odd-looking Rock Pipits.  Just why are they odd-looking, I hear you ask?  Have a look at the 2 photos below, and see what you think:-

Several features might strike the observer right away – the left hand bird is very pale, shows a clear, white supercilium, and has reasonably fresh upper wing coverts. The bird on the right is very grey, also has a clear white supercilium and also has fresh upper wing coverts. The right hand bird also shows a faint pinkish tinge (honest!) to its very white and poorly streaked underparts. To adapt a much used Star Trek phrase: “They’re Rock Pipits Jim, but not as we know them.”

Much has been said and written in recent years about “Scandinavian” Rock Pipits, and I suppose that some of our migrant birds fit with the descriptions given in various field guides for these birds.  However, even specialised books dealing with pipits and wagtails fail to agree on basic identification features, moult timings and extent etc.  Within the UK, there used to be at least 3 breeding races of Rock Pipit, all of which vary in plumage tones according to most sources.  The so-called Scandinavian Rock Pipit is said to winter in the UK, but is also stated to be largely inseparable from our Rock Pipits at that period.  Confused??  You’re not alone!

Most Scandinavian Rock Pipits are said not to assume much, or any, pinkish-ness on the breast in fresh, pre-breeding, Spring plumage – yet a few have been seen in Ayrshire which were quite obviously pink on an almost clear whitish breast.  It was this feature, along with the clear white or whitish supecilium which caused some  confusion among local birders in Ayrshire during the “discovery” years of the early 1970s when the first Water Pipits were being identified in the county.  But, are these recent “odd-looking” birds Scandinavian Rock Pipits?  To be honest, I’m not totally sure, and some may not be anything more than examples of what were formerly thought to be individual races (kleinschmidti from the Faroes, and Northern Isles, and meinertzhageni from the Outer Hebrides).  Let me throw another idea into the ring here.  What if Rock Pipits exhibit the same variation in plumage as Meadow Pipits?  That’s nothing more than mere speculation, but I remain intrigued by these strangers which appear regularly along our shorelines in Spring.

No doubt, like so many other recent discoveries, work on DNA sequencing may hold the key to their true identities.  One thing is certain – Rock Pipits are most certainly not dull!

Answer to earlier bird photo question:  the bird on the left was one of a breeding pair at Turnberry lighthouse on 24th April.  The right hand bird was photographed at Maidens on 12 November.