Situated at the south end of the island, Kildonan is signposted off the A841, km south of Whiting Bay. This road circumnavigates the island, following the shoreline closely along the east and west coasts but taking an inshore line along the south, including by Kildonan. The area in front of the Kildonan Hotel and opposite to Pladda Island is a good starting point for a peaceful birding walk.

Parking is available in the marked area (NS 034 207) to the right of the old coastguard tower. Access to the beach is by the steps going past the children’s play area then down along the beach towards the Kildonan hotel. A second marked parking area can be found if you carry on down the road to the old school house (now letting apartments), go on to the sea front, and walk to the right along the beach.

Another good area is along Auchenhew Bay (NS 017 207) nearby to the west. Leaving the last location, follow the road into Kildonan and use the car park opposite the village hall. Turning left, follow the road past the village store and post office, then the footpath onto the raised beach stretching west towards Bennan Head. 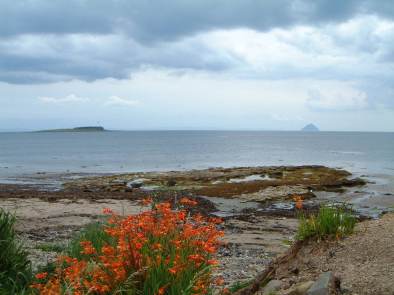 The Kildonan Hotel area is good for Turnstone and Purple Sandpiper foraging on the stone dykes. Dunlin, Ringed Plover, Curlew and Whimbrel also favour this area. Little Stint have been found on the pools above the strand line along with Knot and Black-tailed Godwit. Red-breasted Merganser and Eider are common on the sea. A good number of Manx Shearwater may be viewed offshore in the right season. Iceland Gull has been seen loafing with the resident gulls at low tide.

Passerines including Willow Warbler, Sedge Warbler and Common Whitethroat breed in the scrub area above the beach. Pied and White Wagtail along with Rock Pipit frequent the beach. Buzzard, Peregrine and Sparrowhawk are regular hunters above.

The walk to Auchenhew Bay gives good views of Stonechat, Wheatear and Common Sandpiper. Fulmar, Raven and Jackdaw breed on the Bennan Head cliffs to the west. Wigeon and Shelduck are present at the right time of year along the sea shore, along with Oystercatcher and Curlew. Plenty of Shag and Gannet can be seen on fishing trips from their colonies on the islands of Pladda and Ailsa Craig.