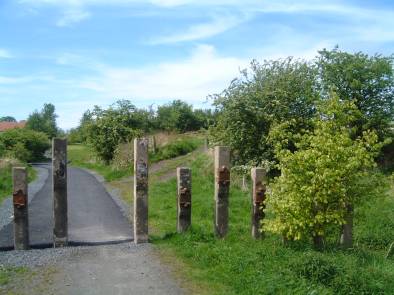 As the name indicates this is not a single location: rather it is an environmentally friendly way of taking in several good locations around Irvine, providing good birding opportunities and sites on route (many of which have their own location reports – follow the links).

The basic route is approximately 15.5 kilometres (9.6 miles), with an extension bringing this up to 24km. No sections of the route are difficult for either walking or cycling but in wet weather there are some short sections which can become muddy. Most of the route is on dedicated paths.

The route, broadly speaking, encircles the built-up area of Irvine. As a result it can be accessed from a variety of points around the town. There are no facilities as such on the route but as the route passes close to the centre of Irvine and through Eglinton Country Park toilets, shops, pubs, cafes, restaurants, buses, and trains are never that far away – within half an hour’s cycling.

The southern and western sections of the route are now part of the SUSTRANS network and around the route there are numerous other paths that can be explored – especially in Eglinton Country Park.

For the sake of convenience it is simplest to divide the route into four sections and proceed in a clockwise direction. 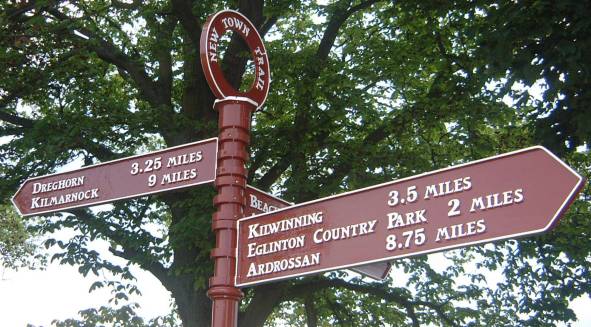 This starts in the park (called the “Low Green”) beside the River Irvine near the Bridgegate Shopping Centre (NS 18 94) and ends where the route crosses the A78 (NS 07 419). From the park, follow the cycle path under the A737 (“Marress Road”) and up to the Burns statue. The path then skirts Irvine Moor and then passes Bogside Golf Course emerging at the SWT Garnock Floods reserve. Immediately after crossing the River Garnock the path goes right and goes under the A78. It is possible to get reasonable views of Kingfisher from the bridge (NS 07 419) which crosses the River Garnock at this point. Grey Wagtails are also present here and the mature trees along the river bank are attractive to Chiffchaffs and Blackcaps. This section is about .5 kilometres in length and provides, perhaps, the widest variety of habitats. These range from tidal estuary, to grassland and scrub, to wetland. Consequently, this section offers a wide range of bird species. These include wintering wildfowl and waders on the river estuary and wetlands areas, summering warblers (Willow Warbler, Whitethroat, Sedge Warbler, Grasshopper Warbler) in the shrubby areas, resident finches, tits and thrushes. Kestrels and Buzzards are relatively common, especially near the railway line, and in winter substantial flocks of Fieldfares and Redwings are present.

After going under the A78 the path follows the river and then joins another path. Turn right here, go over the bridge and follow the path through the houses until you reach the A737 Kilwinning to Irvine road. Go straight over (paying great care as this is a very busy road) and enter Eglinton County Park.

The main route through Eglinton CP adds just less than 4 km more to the journey and passes through a mixture of managed habitats. A number of birds probably not encountered so far can be seen in the park: Great Spotted Woodpecker, Sparrowhawk, Treecreeper and Goldcrest among them. There are a number of different routes through the park of varying lengths and habitats.

This section begins where the route leaves Eglinton CP and enters the SWT reserve at Sourlie Wood (NS 42 418). For the next 4.5 kilometres it winds its way through Girdle Toll, Bourtreehill and Broomlands Park where it crosses the Annick Water and is itself crossed by the A78. The cycle path follows the path of an old railway, around Sourlie pond, and then passed Lawthorn Pond (NS 45 408) and down to the Irvine to Kilmarnock cycle path at NS 56 85. The adjoining flooded field is Capringstone Flash. The route now goes right along the cycle path to emerge at Newmoor Roundabout (NS 9 82).

In this section it will be mainly those species habituated to suburban style living that will be encountered. However, Kingfishers are present on the Annick Water and the Ayrshire Bird Report 2001 has records of Green Woodpecker at Perceton (NS 54 405) and Nuthatch at Stanecastle (NS 7 99) neither of which is far from this part of the route.

From the A78 (NS 9 85) back to the Bridgegate Shopping Centre (NS 18 94) is about .5 kilometres in length and follows the bank of the Annick Water down to where it meets, and follows, the River Irvine back to the starting point. Otter are regular in this stretch.

From Newmoor Roundabout the path follows the River Annick around the Thistle Hotel to emerge at NS 1 84 on the B7081. Cross over this road and continue on the cycle path beside the river. This passes a couple of ponds (Milgarholm Ponds) that are worth checking out. The path goes under the A71 at the Bailey Bridge (NS 24 82) and then continues downstream along the River Irvine until the starting point is reached.

It is possible to turn upstream at the Bailey Bridge to the A737. The SWT Shewalton reserve is 1.5km along the road on the left-hand side at NS 26 70.

Through this section a good variety of passerine species, including Sedge Warblers and Willow Warblers and possibly Reed Bunting, can be expected during the summer months and in winter, in the planted areas, flocks of tits, finches, and thrushes are likely to be seen, especially among the alders. 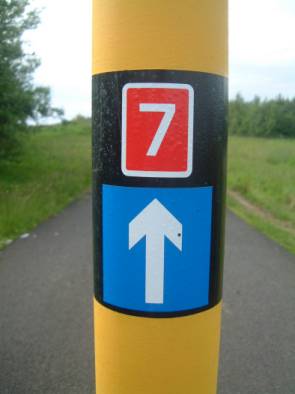 It is possible to extend the route by another 8km by taking a more southerly path through Dreghorn. At NS 50 85 go up Station Brae into Dreghorn. At the traffic lights so straight over and follow the road down to the river at NS 57 78. On the right is a cycle path that follows the River Irvine down to the chemical factory at NS 46 68. In Spring the path along the river is good for Blackcap, Garden Warbler, Sedge Warbler, Grasshopper Warbler, Chiffchaff, Willow Warbler and Whitethroat. The moor to the north of the river is good for Kestrel. The area near the bridge has a Sand Martin colony and Common Sandpiper can be seen on the gravel. Goosander and Heron have been seen on the river.

Go past the chemical factory (pausing to savour its attractive aroma) and at the roundabout turn left onto the B7080. This passes Oldhall Ponds (an SWT reserve worth exploring either side of the road) and then at the Meadowhead roundabout go straight over heading for the paper factory. The cycle track then turns right (signposted for Irvine station) and skirts around Shewalton pond. This is a roosting site for gulls feeding on the nearby landfill, and a variety of ducks, including occasional Long-tailed Duck. There is a quiet woodland SWT reserve at NS 7 57 opposite the paper factory which is good for Siskin, Goldcrest, Coal Tit, and Redpoll.

The cycle path crosses the A78 by a pedestrian bridge and then continues between Western Gailes and Glasgow Gailes Golf Courses. It then goes through a moor with gorse that is good for Stonechat. The path proceeds through Irvine Beachpark until it comes out at the Harbourside with views across Bogside Flats. This is one of the best birding locations in Ayrshire. The path continues along the side of the River Irvine and then past Fullarton Church until it emerges at the Low Green, the starting point.

Around 80 species of birds could reasonably be seen over the course of the year. In addition, early morning journeys can quite easily result in close encounters with Roe Deer and Foxes.