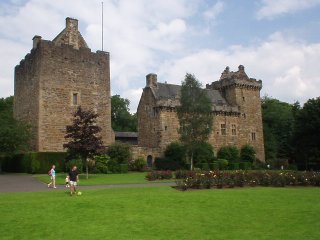 Dean Castle Country Park is located at the north end of Kilmarnock (NS 436 95). The park is open from dawn till dusk and is free of charge. If you are unfamiliar with Kilmarnock’s one way system, the simplest way to get to the park is to by-pass the town centre completely! This can be done by heading north for Glasgow on the A77 until you reach the junction at the Meiklewood Interchange on the outskirts of the town. This is sign-posted ‘Kilmarnock B7038’- there is also a brown tourist sign which says ‘Dean Castle Country Park – 2 miles’. This junction is the fourth Kilmarnock turn-off if you are travelling from Ayr or the second one if you are travelling from Irvine via the Bellfield Interchange. Heading south from Glasgow take the first available turn-off for Kilmarnock (just after Fenwick). From this junction drive down the B7038 past the new housing estate at Southcraig to the roundabout next to the Howard Park Hotel / BP garage. Bear left at this roundabout and continue on down Glasgow Road. Take the fifth turning on the left onto Dean Road. The main entrance to the Country Park is halfway along this road. It takes about 15 minutes to walk to the park from the bus or railway stations in Kilmarnock town centre and the No.4 bus service to and from Glasgow passes right by Dean Road.

The Country Park is a compact 200 acre site, comprising of a variety of habitats, including mixed woodland, conifer plantation, semi-natural oak woodland, areas of scrub and open pasture. The Fenwick and the Craufurdland Waters run through the site and merge to form the Kilmarnock Water near the park boundary. A network of trails allows easy access to all areas of the park and there are plenty of quiet corners to explore.

Despite the park’s urban location it a attracts a good variety of birds and is well worth a visit in spring and early summer, although there is plenty of interest at other times of the year as well. The park is surrounded on three sides by houses, so birds usually associated with gardens can be readily seen, these include Collared Dove, Song Thrush, Wren, Blackbird, Dunnock, Robin, House Sparrow and Starling. To the northeast the park borders onto dairy farmland where Yellowhammer, Goldfinch, Rook and Black-headed Gull can be seen throughout the year. In the autumn and winter months, large flocks of Fieldfares and Redwings frequent this area, along with smaller numbers of Meadow Pipits and Pied Wagtails. 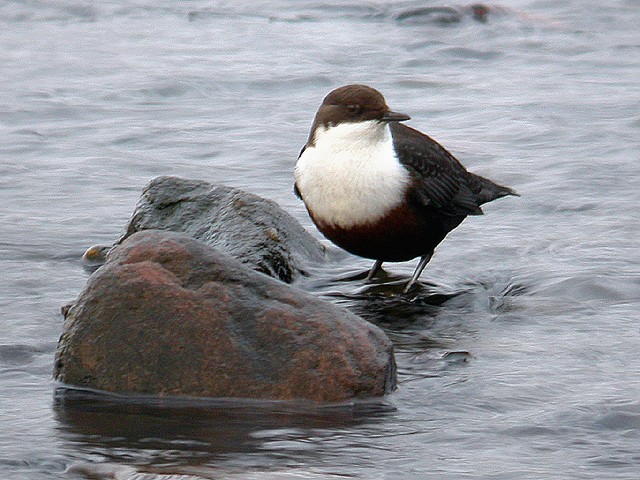 Sparrowhawk and Tawny Owl are resident breeding species in the woodlands, both are a common sight around the area in front of the castle. Kestrel and Buzzard breed nearby and can often be seen hunting over the open fields of the park. Many of the more common Ayrshire species are also resident in the woodlands. Coal, Blue, Great and Long-tailed Tits are a familiar sight, Treecreepers and Goldcrests are also regularly seen. There are good numbers of Chaffinches, Greenfinches, Bullfinches and Siskins as well as one or two pairs of Great Spotted Woodpecker and Mistle Thrush. Dippers and Grey Wagtails frequent the rivers and Kingfishers have been seen now and again at some of the quieter pools. During the summer, Willow Warblers, Chiffchaffs and Blackcaps breed throughout the park and there is a small area of semi-natural Oak woodland where Wood Warbler has been heard on occasion. Spotted Flycatchers, Swifts, Swallows and House Martins also make a welcome addition to the bird-life found in the park at this time of year. An old flooded quarry is the only significant area of still water in the park, Mallard and Wigeon are the two duck species seen most often amongst the exotic wildfowl, although other species such as Goosander and Goldeneye turn up from time to time. Grey Herons nest nearby and there are often Lesser Black-backed Gulls and Cormorants on the small island. Early morning visits are best as the park can become very busy, particularly at the weekends and during the holidays, although there are some areas where very few people visit at any time! Trail leaflets are available from the Visitor Centre or the Ranger Office next to the castle. 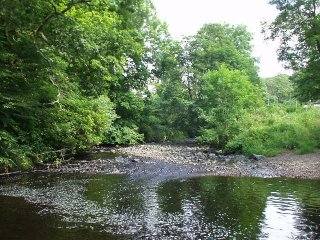 The castle which gives is name to the country park consists of a 14th Century keep and a 15th Century palace, both of which can be visited on one of the free public tours which run each afternoon. There is also a visitor centre with a well stocked tearoom and an interpretation area where you can find out more about the social and natural history of the park. During the summer months, the countryside ranger service runs a varied programme of events. More details of these events and further information about the country park can be obtained from: