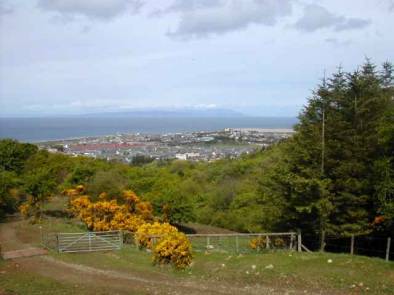 There are 5 way-marked walks starting at Shallochpark car park (NX 964 182) to the south of Girvan esplanade. Details of the routes can be had from www.ayrshirepaths.org.uk or from a leaflet available from tourist information centres. Coming by car, the park is off the A77 Girvan-Stranraer road, by the sea just south of the roundabout on the outskirts of Girvan. There is a regular bus service, Ayr-Stranraer, along A77 and trains from Ayr. From the railway station, 2km distant, an interesting birdwatching approach on foot is past the harbour and along the esplanade. If using a bike, the A77 is unsuitable and pedestrians must be given right of way on the esplanade, or walk the bike at this stage.

One of the best routes is to Laggan Loch, following the blue markers, a walk of some 7km for which 2.5 to hours should be allowed. East across the Shallochpark roundabout, a minor road leads left up towards housing and at a gate on the right at the first bend the track signed Hill Path to Barr is the first stage of the walk, best followed clockwise back to Shallochpark.

Good along the esplanade with priority to pedestrians. Avoid the A77.

The Path and Habitat

Initially, the route is up through woodland, over the railway line, and on upwards with Dow Hill to the right. It then crosses open moorland with extremely wet and boggy patches to Laggan Loch, scarcely more than a marsh with a little water. Stout footwear is essential. Just beyond, at 260m altitude, the route diverges south from the hill path to Barr, and forks right from the longer (17km) red marker walk, to join a good track west over the shoulder of Laggan Hill. Over a gate with a “Danger of Death” sign, the route passes through fields with livestock, possibly including bulls, steeply down to Brochnell Farm on the A714 and back by the roadside path to Shallochpark.

On the coast, Gannet, Arctic and Sandwich Tern are likely in season, and various gulls and waders on the shoreline. The woodlands at the start of the route are good for tits, Wren, Goldcrest, Blackbird and Song Thrush. The open moor and grassland is very good for Buzzard, Raven and Kestrel. Meadow Pipit and Skylark are abundant in season and Wheatear is possible. Around Laggan Loch, there is Sedge, Grasshopper and Willow Warbler. Carrion Crow and Rook are readily seen. In the hedgerows, for example near the railway and Brochnell Farm, there is Long-tailed Tit, Chiffchaff and Robin. Flocks of Linnet can be seen in the fields beside the A714.

Snacks, ices drinks can be had at a part-time kiosk in Southpark CP. There is a good range of cafes, restaurants and pubs in Girvan.