This Scottish Wildlife Trust woodland reserve lies on the west bank of the River Ayr starting at Failford. To get there follow the B743 from Mauchline or the Ayr bypass. Park opposite the Failford Inn at NS 460 262 (this makes a good finishing point – check out their web site). The reserve is reached by the sign-posted path heading towards the river from the west end of the village and is open all the time. 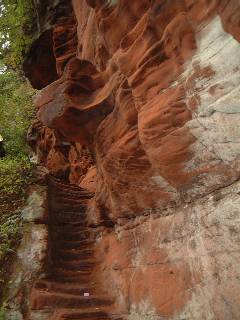 The River Ayr cuts through a sandstone gorge flanked by a rich deciduous and coniferous woodland. There are several paths going along the river and higher up through the wood giving circuitous walks of an hour or up to three. One interesting feature is Peden’s Pulpit: steps have been cut in the sandstone to a place where the Covenanter Alexander Peden preached to his congregation on the other side of the river (see picture). Robert Burns parted from Mary Campbell here “after plighting his troth” to her.The path gets a little hairy at this point and is not suitable for people with a poor head for heights (like the author!); however, it is possible to go up and around.

SWT have done extensive work (funded by a lottery grant) upgrading the paths and drainage in the reserve and clearing back the vegetation beside the path. This makes it less muddy underfoot, however, it still isn’t suitable for wheelchair users. The section of the path at Peden’s Pulpit is now so eroded that access is extremely dangerous and should not be attempted.

Obviously, the reserve is particularly good for woodland and river species. These include Jay, Buzzard, Dipper, Grey Wagtail, flycatchers, Great Spotted Woodpecker, Heron, Goosander, Treecreeper, warblers. In the spring the woodland can be extremely noisy! Osprey have been seen on passage.

The SWT have done a good job in maintaining the reserve and the paths are clear and go through a variety of good habitat. It is a surprisingly quiet place given just how attractive the area is. Given the relative scarcity of woodland in Ayrshire, this reserve is an absolute gem.