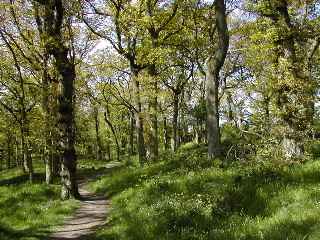 Woodroad Park (NS 565 204) is a municipal recreation area which lies at the north end of Cumnock, the second largest town in East Ayrshire. The entrance to the park is off the B7083 Cumnock – Auchinleck road and is just two minutes from the bus station and town centre facilities. An extensive network of footpaths takes in all of the main areas of the park and a public right of way links the park to nearby farmland.

The main interest from a birding point of view is the semi-natural ancient woodland which makes up a substantial part of the site. Templeton Wood stretches along the north-west edge of the park and contains a good variety of tree species including mature Oak and coppiced Hazel. The woods are managed for conservation value by East Ayrshire Woodlands. Resident bird species which can be seen here all year round include Great Spotted Woodpecker, Sparrowhawk, Tawny Owl, Treecreeper, Jay and Bullfinch. As with other similar sites, the best time to visit is spring and early summer when the woodland attracts a range of migrants such as Redstart, Willow Warbler, Chiffchaff, Blackcap and Spotted Flycatcher. Wood Warbler and Tree Pipit are also possibilities. Swift nest on the railway viaduct and Swallow, House Martin and Sand Martins can all be seen in the park. In autumn and winter, mixed flocks of Blue, Coal, Great and Long-tailed Tit can be found foraging through the woods along with Treecreeper and Goldcrest. Remnants of ancient woodland also line the banks of the Lugar Water at the north-east end of the park and a footbridge leads across to the opposite bank of the river. As well as these wooded areas the park has sections of open grassland where typical “park birds”, such as Song Thrush, Blackbird, Pied Wagtail, Chaffinch and House Sparrow can be found. The river usually has at least one pair of Dipper, which can often be seen from either of the two bridges. Grey Wagtail and Grey Heron are also present and Kingfisher is seen occasionally. To extend your exploration of the park (and your bird list) you can follow the public right of way which goes up past the caravan site and under the railway viaduct to Templand Mains. This path then heads off uphill towards Rigg Road, passing through farmland which is fairly typical of the area. Breeding species found in the fields here include Oystercatcher, Lapwing, Skylark and Meadow Pipit, while Greenfinch and Yellowhammer can be seen along the hedgerows.

In 2008 the local community started an ambitious programme of regeneration and enhancements to the Park.

The nearby Baird Institute Museum on Lugar Street is worth a look if you are interested in the history of the local area. The museum is open on Monday, Tuesday, Thursday and Friday from 10am – 1pm and 1.30pm – 4.30pm. Just around the corner is Stevenson’s Bakery which has plenty of good things to eat and there is a profusion of pubs, cafes and shops within a few minutes walking distance.

There are frequent bus services to and from Cumnock. The town’s bus station in The Tanyard is the main transfer point for services to outlying areas such as Muirkirk and New Cumnock. The two main buses which run from Ayr are the 43 and 46, the 43 goes via Mauchline and the 46 via Ochiltree. These leave Ayr bus station every hour, the 43 at half past and the 46 at five to.

Travelling from Kilmarnock you need to catch the X76 which leaves the bus station every hour on the hour from 10am onwards (there is one earlier bus at 8.15am). There is a handy bus stop right at the entrance to Woodroad Park, but if you miss it the bus station is only a two minute walk away!