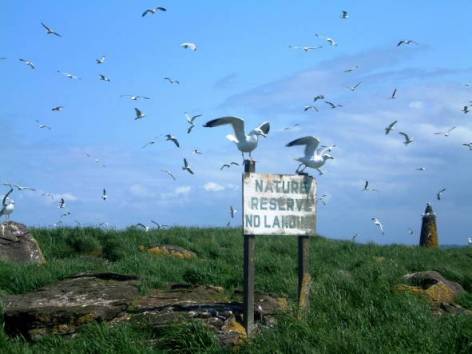 On 7 June I joined a bunch of ringers (I’m sure the collective noun is something obscene so we’ll stick with ‘bunch’) on a trip out to Lady Isle to do some ringing. Lady Isle is a small, privately owned island 4km from Troon that is only 6m at its highest point. For many years this has been a nature reserve and you need permission to land, which made a trip to it an exciting prospect.

The team involved Dave (Lord of the Rings), Dave (Gadget Man), Julie (Guano Girl), Stuart (Catcher in the Rocks), Chris (Eider Man) and me (Scribe). (A word to the wise: if going out ringing seabirds always volunteer for Notebook duty as this means you don’t get covered in fish paste and worse!) 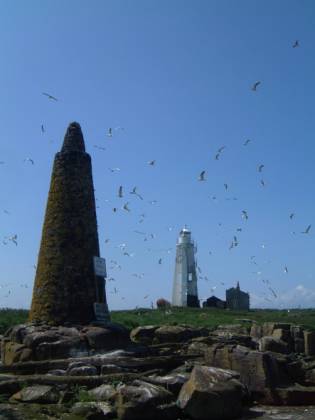 Obviously we first had to get out there and this involved taking a boat from Troon. I had expected something small, leaky and dangerous so you can imagine my delight at seeing the C-Gem. She looked like something out of Monte Carlo with a satisfying collection of high-tech safety gear and a captain who looked like he knew his port from his starboard (whereas I have concentrated on just the port). We left the harbour in a decent swell (for a fully paid-up landlubber like me). Being rough-tough outdoor types we naturally headed up to the top deck for the best view. Our captain obviously liked to give his marine diesels a thorough work-out and we were soon going at an impressive speed with the result that deluges of spray smashed over the top deck leaving me drookit. I decided that a visit to the bridge to check out our position on the GPS seemed a drier and more sensible option leaving the ringers to drown. It was an exhilarating ride: people pay good money for less at theme parks. However, we soon reached the Isle and offloaded onto a fast Zodiac (piloted by Don) to reach the landing stage, passing large numbers of seals who were wondering who was disturbing the peace.

As with all sea-bird colonies your senses get assaulted. Firstly there is the sight of birds everywhere: on rocks, in the air. Then comes the noise of all the gulls screaming at the intruders. Then comes the smell…. Fortunately after an hour or so your brain gives up and just ignores what your olfactory sense is telling it. From the very start I had decided to stop at the involvement of three senses; the others pushed on with at least one more. 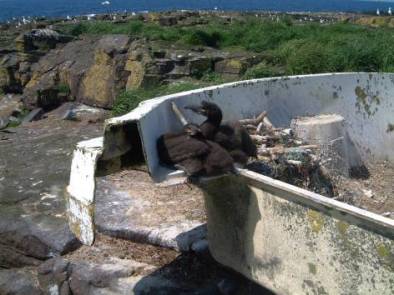 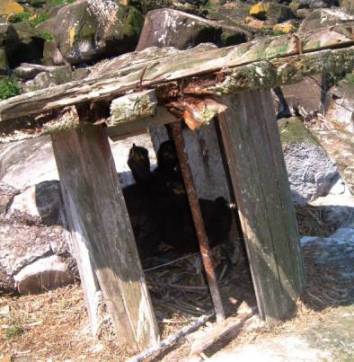 The island is uninhabited (by humans) and covered by nettles. We needed to be very careful as we headed for the bothy as nests and chicks were everywhere.It is a real circle-of-life place: eggs, chicks, young, adults, corpses, bones. The ground is very uneven and one has to be very careful in finding somewhere to put your feet that isn’t already occupied by a chick or a clutch of eggs.

We left our packs (with lunches) on the one piece of open ground and headed off to start ringing. We would have to move fast as the C-Gem would return for us in roughly three hours.The island isn’t very big (say 500m at its widest) but is covered by nesting birds. The major species are gulls (Herring, Lesser Black-backed and Great Black-backed), Shag and Cormorant. Each has roughly its own area and we started with the Shags. The technique involves wandering over to a nest, grabbing the youngsters and putting on a ring. Dead easy. Unfortunately they are not too keen on this and like to protest noisily and with snaps of a pointed, sharp beak. The other safety tip is not to be in line of the front or back as they can eject “material” quite a distance. Julie discovered this to her cost: it was noticeable that people kept a bit further away from her after this (see photo 6). We could also see that the birds were being well-fed as they were keen to show us what they had for breakfast – and it was a significant repast. While the ringers were enjoying themselves with their pliers, I had the onerous task of recording the details. This required writing down the ring number and an indication of the number of birds ringed in that nest. For example, 2/3 means the nest had three chicks but only 2 were ringed (the other being too small for a ring, for example). This gives a good idea of just how well the colony is doing: this year things look very promising with most nests having broods of three chicks.The ring number is used when the bird is recovered (ringer-speak for someone finding it washed up on the tide-line): you can send the number to the address on the ring and they’ll tell you its details. Roughly 1% of ringed sea-birds are recovered in this way. However the data are invaluable as it shows how birds distribute after leaving their nests.

Only the Shags, Cormorants and Eiders were ringed. There were lots of gulls around but trying to distinguish the species a chick belongs to is very tricky even when you have the little blighter in your hand. You could try to spot an adult on the nest and then assume the chick is of the same species. Unfortunately this doesn’t always work as the adult might be looking for a spot of lunch rather than being all parental; also the gulls seemed to prefer being airborne shouting abuse at the humans below.Luckily it was a hot day and so the eggs wouldn’t get chilled with the parents away on screaming-duty. 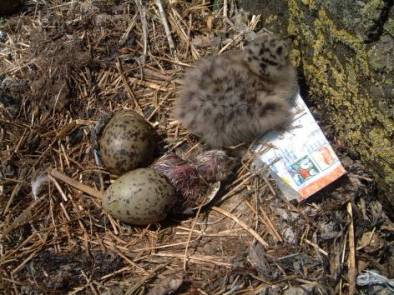 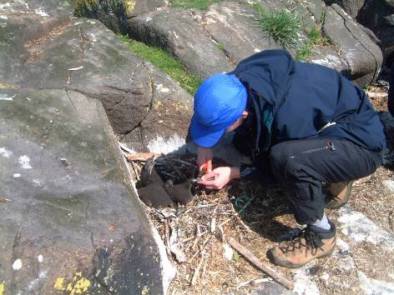 While we were doing all this, Chris was off trying to catch Eider. This is much more difficult as they like to hide in the long grass and nettles. The technique involves walking are fully through the nettles with a big net checking for birds. When one takes flight you lunge at it with the net and then curse as it flies off. You then repeat this procedure. Amazingly Chris managed to bag four of them this way. Once caught they get the usual ring but also a very attractive white stripe super-glued to the back of their head. This will last until the next moult (something Eiders love to do) but means that Chris can track sightings of birds along the Clyde as different sites get different coloured stripes.

After a few hours we had run out of rings having ringed 98 Cormorants and 111 Shags in a total of 91 nests. However, this was by no means all the nests on the island. What amazed me is how much these rings cost: each Cormorant ring costs 55p. This makes ringing a very expensive hobby as the ringers all pay for their own rings. Still, it was a good excuse to have lunch with only the worry that some enterprising gull hadn’t opened up the rucksacks and made off with the sandwiches. As we munched we could see the good ship C-Gem heading out to collect us (see photo 7): as you can see she looked superb in a tropical sea (with Irvine in the distance!). Since the tide had come in a bit Captain Zodiac needed to be careful to avoid scraping the barnacles (see photo 8). We could then load our stuff. It was noticeable that people kept a distance from us now as they had that “Ahh, Bisto” moment: apparently it washes off after a few showers.

Then it was a quick trip back over a beautifully calm sea to Troon Yacht Haven with a great view of Lady Isle behind us (see photo 10). It was a cracking day out. We’d all like to thank the captain of the C-Gem and Don for getting us out there in style. 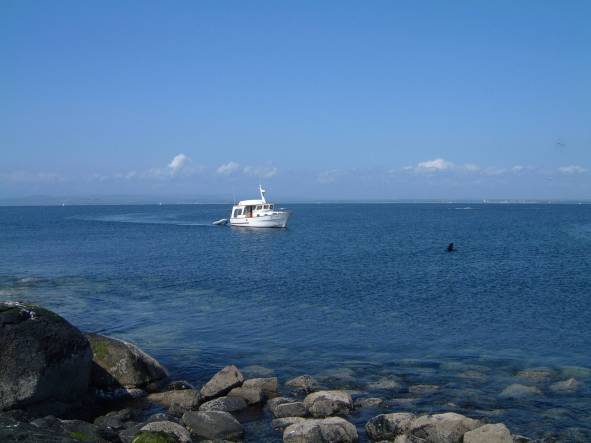 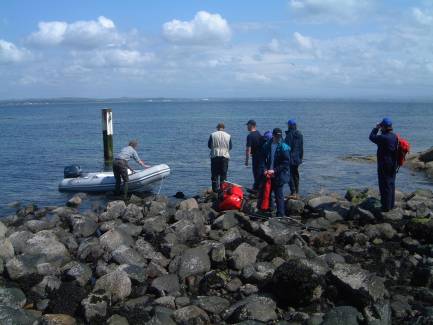 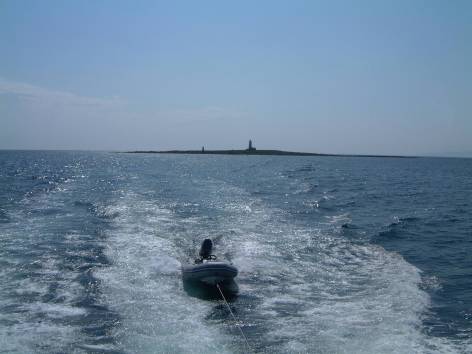