Rising up from the surrounding farmland, the volcanic remains of Loudoun Hill (NS 609 79) provide an impressive landmark at the eastern end of the Irvine Valley. It was in the shadow of this hill in 1297 that William Wallace and his men ambushed an English baggage train bound for Ayr and later in 1307 that Robert The Bruce fought a decisive battle in his struggle for Scottish independence. Today the hill is the haunt of rock climbers, picnickers and the odd birder or two. The site is just off the A71 Strathaven road, about miles east of Darvel. There is a public car park at NS 613 78 which can be reached by turning left onto the unclassified road immediately after the entrance to the gravel quarry in front of the hill. Follow this road up towards Drumboy Farm, the car park is on the left halfway up. From the car park there is a footpath which leads down to the valley of the River Irvine and the base of Loudoun Hill itself. An alternative approach to the hill can be made by parking in the car park at the Loudoun Hill Inn (NS 596 74), crossing the A71 and following the unclassified road directly opposite. This takes you up past Newlands Farm to the western face of the hill. There is a sign-posted Right of Way here which leads up the hill and provides the easiest route to the summit. 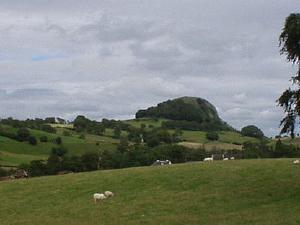 Access to Loudoun Hill by public transport is possible (though not easy) by bus. The No. 42 service run by Henderson Coaches, from Darvel to Hamilton passes by the site five times a day: the journey takes about twenty minutes. The return journey is slightly problematic as you have to catch one of these buses on the way back – the easiest place would be outside Loudoun Hill Inn. Further details can be obtained from The Travel Centre on 0870 608 2608. To get to Darvel you need to catch the No. 1 Stagecoach Service from Kilmarnock bus station which leaves every half hour. The site is within easy cycling distance of Darvel, but be warned – the A71 is a very busy road!

Access along the A71 is not recommended. Instead, approach via byways to the north.

Good views of the crags on the south and east faces of the hill can be had from the car park mentioned above, displaying Peregrine and Raven can easily be seen from here at the start of the breeding season, Buzzard and Kestrel also frequent the slopes of the hill. For energetic birders the fields, hedges and braes along the River Irvine at the base of the hill are well worth exploring. In spring and summer the birds found there include Lapwing, Curlew, Meadow Pipit, Garden Warbler, Blackcap, Whitethroat, Pied Wagtail, Wheatear, Goldfinch and Yellowhammer. On the river itself Dipper and Grey Wagtail can be seen. The scattering of mature trees around the lower parts of the hill are good for Tits and Finches, Spotted Flycatcher, Chiffchaff and Willow Warbler. The summit of the hill is worth exploring at any time of the year, (on a clear day the views over Ayrshire, Lanarkshire and the Firth of Clyde are spectacular), but a visit in April could provide a good chance of finding spring migrants as the hill provides a handy stopping off point for arriving birds. Migrating Ring Ouzel have been recorded here in recent years. In winter the surrounding fields often hold very large numbers of Fieldfare, Redwing and other northern species and sometimes flocks of Greylag and other geese.

There is an extensive and well sign-posted network of footpaths in the Irvine Valley area and Loudoun Hill is one of the key access points. A large notice board next to the car park has details of the routes on it and leaflets are available free of charge from a number of local information points such as the Town House in Darvel’s Main Street, or visit the Ayrshire Paths website. As well as giving you a perfect opportunity for wildlife observation, many of these footpaths also take in sites of historical interest like the museum at Barr Castle, the 15th Century Loudoun Kirk and the scenic viewpoint of Gallow Law Cairn. A day exploring the area would be well spent and there’s a good chance of notching up a healthy bird list along the way. If climbing the hill gives you a bit of an appetite, a good selection of bar meals can be had at the Loudoun Hill Inn mentioned above, and the Balmoral Knitwear Coffee Shop in Church Lane in nearby Galston has good coffee and a vast array of cakes for birders (and other folk) with a sweet tooth!