These notes relate to one, mainly, of 4 way-marked trails starting from Oswald’s Bridge (NS 87 231) car park by the River Ayr in the grounds of the Scottish Agricultural College (SAC), Auchincruive, by Ayr. Information on the trails, including maps, can be had from www.ayrshirepaths.org.uk or from a free leaflet available from tourist offices or public libraries. The notes draw freely on the Waggonway Leaflet and full acknowledgement is due to its authors.

Ayrshire Paths is an initiative supported by various organisations including Scottish Enterprise Ayrshire, Scottish Natural Heritage and the three Ayrshire Councils. They have signposted and improved many traditional walks and pathways around Ayrshire and have a continuing programme of development.

From Ayr, head out along A719 to the A77 bypass. At the major roundabout intersection continue eastwards along the B743 for Mauchline. In just over 1km turn right for 1km along an unclassified road past the main entrance to SAC Auchincruive. The car park is on the left through a subsidiary entrance just before the bridge over the River Ayr.

All the waymarked trails have interest for the birder but a particularly good sample of lowland Ayrshire habitat can be had by combining the Three Green Knights with the Waggonway.

Network of metalled, paved and un-metalled paths within Auchencruive. Tracks in woods are narrow and steep. 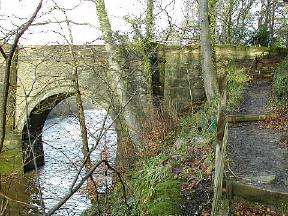 From the car park, cross Oswald’s Bridge, dating to 1826, over the River Ayr. At this point the river is broad and relatively shallow with well established woodland and grassland banks. The bridge is an excellent vantage point from which to scan the diverse and rich habitat. Turn left immediately down to the water’s edge and follow the path upstream through mixed woodland of Beech, Oak, Scots Pine and Japanese Larch. The opposite bank is open parkland. A steep climb away from the river leads to a track across open grassland surrounded by woodland with distant views of the Carrick Hills and Isle of Arran. Then re-enter woodland along the Waggonway Trail following the route of a 19th century railway linking inland coal pits to Ayr harbour, initially using horse drawn trucks and later steam locomotives. The path eventually climbs steeply to a spectacular viewpoint high above the river, reputed to be a favourite of Sir William Wallace of historic fame. The return to start is by a farm track over Loudon Law through a pastoral landscape of open views, very typical of much of Ayrshire.

At any time of year the river is habitat for Dipper, Kingfisher, Grey and Pied Wagtail, Goosander, Red-breasted Merganser, Heron and Mallard. In summer, Swallow and House Martin hunt over the water. Sand Martin may come from a down stream colony and Swift hunt overhead. Sparrowhawk, Kestrel and Buzzard are the most likely raptors to be seen. The trail passes through Pheasant Nook. Lapwing and Curlew browse the fields in winter together with various of the gull family but the habitat is less favourable for breeding. Flocks of Fieldfare and Redwing are common in winter and Blackbird, Song Thrush and Mistle Thrush are present all year. The woods are home to Blue, Coal, Great and Long-tailed Tit, Treecreeper, Robin, Wren, Dunnock, Goldcrest and Great Spotted Woodpecker, with Spotted Flycatcher in summer. Chaffinch, Greenfinch and Siskin are readily seen, Bullfinch more occasionally. Typically, Willow Warbler, Chiffchaff, Blackcap and Garden Warbler can be expected in season, and possibly Sedge Warbler and Whitethroat where conditions are right. Yellowhammer should be present but is becoming a rarer sighting. And we must not forget the Starling, Rook, Carrion Crow, Jackdaw and, increasingly common Magpie. Jay is a possible sighting. Though the entrance to the car park closes at dusk, there is an alternative route out through the SAC grounds for those staying on to listen and search for Tawny Owl.

The other walks cover a broadly similar range of habitat in differing proportions and are worth exploring. 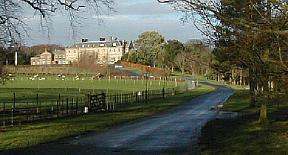 The large building visible up river from the car park and various points along the trail is Oswald Hall, built in 1767 to a design by Robert Adam. Oswald was a wealthy merchant who bought Auchincruive in 1764 and included among his accomplishments the role of chief negotiator during the War of American Independence, earning the nickname Richard the peacemaker. He rose from humble origins to a position of enormous wealth, largely as a result of his involvement in the slave trade – an unpleasant facet of his character – but, no doubt, simply a son of his time.