After that lovely summer there’s been a pile of excellent photos sent in, and I apologise for the delay in publishing them – I’ve been far too busy sitting in the garden keeping the Chilean wine industry going! However, there are some stunning pictures and not just of the exotic stuff. Dave Grant even managed an addition to the Ayrshire Bird List with a photo of roughly 25% of a Grey Partridge. His photo of the Northern Bald Ibis will need to wait for the Great&Good to pronounce on its provenance.

My thanks go to Dave Grant, Angus Hogg, Bruce Kerr and Iain H Leach for their contributions to the Photo Gallery.

The Autumn 2018 issue of The Gannet, the club newsletter of the RSPB Central Ayrshire Local Group is now available: click here to download it

The Autumn 2018 issue of The Stonechat, the club newsletter of the Ayrshire Branch of the SOC is also now available: click here to download it

For all you gull fans out there, here’s a couple of photos sent in by Dave Grant for you to ID in our summer photo quiz.  Both taken in the same place in Ayrshire.  No prizes other than bragging rights.  The Editor’s decision is final, although obviously, bribes are accepted.  As usual, click on the thumbnail for the full-size image.  My thanks to Dave for the images.

With Spring approaching I’ve tried to clear my inbox with the last of this winter’s photos. I’ve limited it to one shot of a Glaucous Gull from the pile I was sent (Gull fans do like to show the details of every feather!). The one I’m really impressed with is Angus’s Jack Snipe: given they only show when you are about to stand on them, to get any photo let alone a nice one takes great reactions.

My thanks go to Dave Grant, Angus Hogg, Bruce Kerr and David Lynn for their contributions to the Photo Gallery.

This report on the 2013-2014 Lady Isle gull colour ringing project first appeared in the Ayrshire Bird Report 2014 and is published with permission from Ayrshire SOC.
END_OF_DOCUMENT_TOKEN_TO_BE_REPLACED 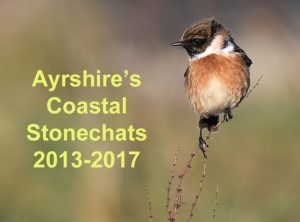 Angus Hogg has kindly written an article looking at how Stonechats are faring in Ayrshire in the period 2013 to 2017.  This follows on the survey work done in 2013 following the severe winters that almost wiped the species out in Ayrshire.

Those of you paying attention will remember the challenge I set Angus Hogg about proving the breeding of Green Woodpecker in Ayrshire after he sent in some pictures for the Photo Gallery of juveniles in the summer.  Well, he delivered and has submitted a thorough and enjoyable article on the Green Woodpecker in Ayrshire giving its history and status in the county.  Enjoy the article and get ready to search next Spring.

This website has now been going for over 17 years and a gaping hole in the photo coverage of the Ayrshire Species List has finally been filled. Yes, I’ve now got a picture of Feral Pigeon – my thanks to Dave Grant for sending that in. However, don’t worry, we’ve also got pictures of less exciting stuff. For example, we have a picture taken in 1985 (who says this site isn’t up-to-the-minute?!) of a Ross’s Gull seen in Ayr. This photo was taken by Roger Hissett and is believed to be the only one of this bird (and obviously makes it onto the Rare Ayrshire Species list). There are other great pictures of a variety of species, and my thanks go to Dave Grant, Roger Hissett, Angus Hogg, Bruce Kerr and Bob Ross for their contributions to the Photo Gallery.

Apparently a Spotted Crake has been seen recently! My guide-book says they are secretive and hard to see. Clearly the Doonfoot individual hasn’t read the book because it has put on a great show as the various photos show. These are also the first photos of an Ayrshire bird and so made it onto the Ayrshire Species List. I received pictures from a few people (all stunning) but Cathy Cochrane’s made it onto the list, primarily because she’s new to this site!

Another entry to the Ayrshire Species List is Angus Hogg’s picture of a juvenile Green Woodpecker – he now just has to prove its parents bred in Ayrshire!

While the Spotted Crake is very photogenic, my favourites this time round are a pair of photos, again by Angus, that summarise the hope and reality of an Ayrshire Summer: the Redstart singing his head off in hope; the fledgling Swallow enjoying the rain!

My thanks go to Cathy Cochrane, Dave Grant, Angus Hogg and Iain Leach for sending in photos for the Photo Gallery. 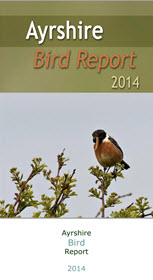 The printed copy of the 2014 Ayrshire Bird Report is now available. It consists of 102 pages including 18 full-colour inner pages with 36 photographs.

It can be obtained via the outlets listed here.